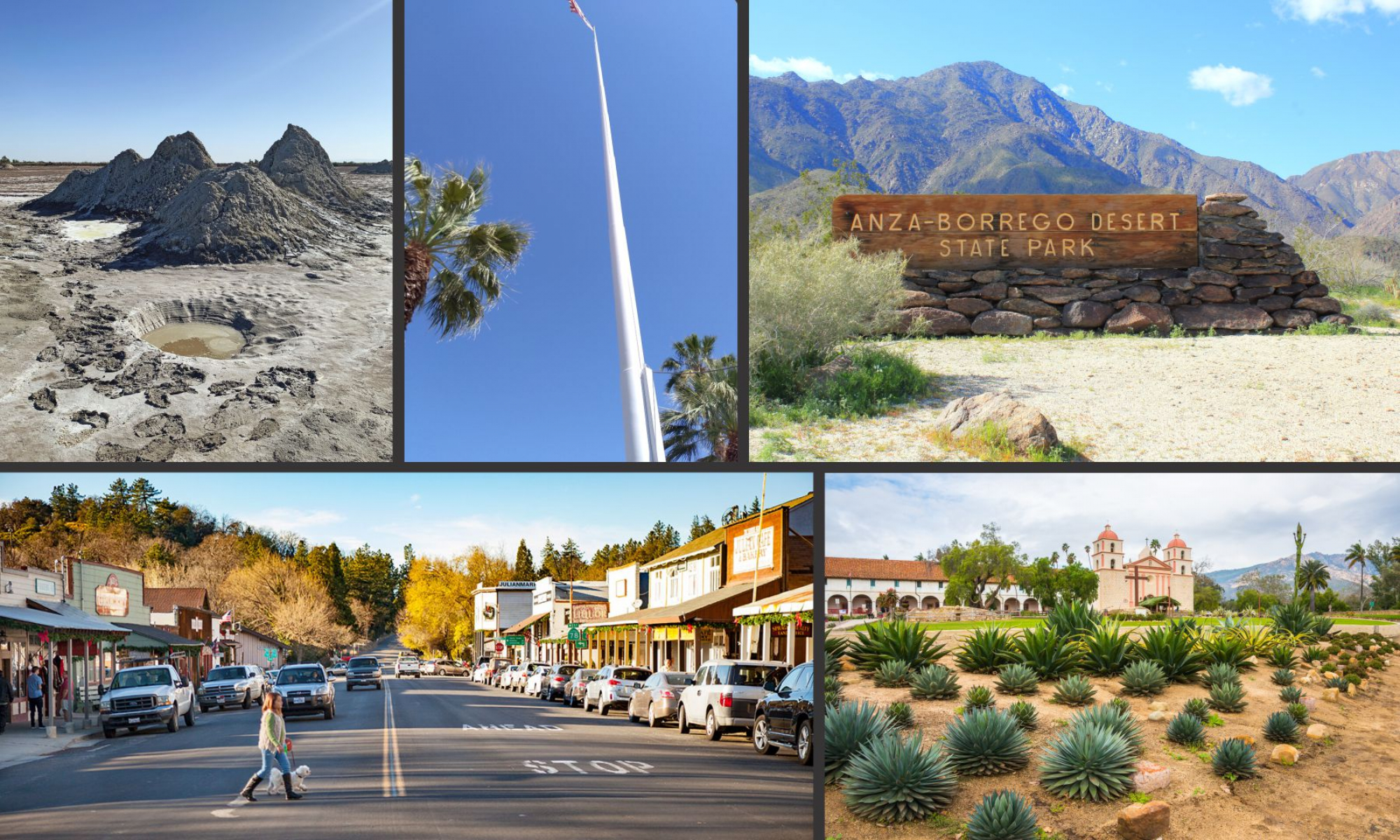 After being under a stay-at-home order for over a year, residents of SoCal, like most others, are itching to get out of the house. Though with the pandemic not quite over, it's still going to be a COVID summer, hopefully, the last one ever. So, we still need to be cautious. But we can't stand one more day in the house. What do we do? Well, Suite Life SoCal has an idea--ROAD TRIP!

From the bizarre to the beautiful, rural SoCal is chock-full of quirky and interesting sights, both natural and man-made. These are a few of the out-of-the-way places you can take the family to get away from it all and get to know some of the unique places rural SoCal has to offer.

Our journey begins near the Salton Sea, in the Imperial Valley, menacingly close to the mighty San Andreas Fault, five miles NW of a town called Niland at the infamous "Niland Mud Pots." This place is very thermally active. These mud pots can be found throughout the area, bubbling and gurgling out mud, steam, and Co2 gas. Basically, they're geysers. They also have a distinctive smell. If you drive down highway 111, you can see the mud pot giving the state of California fits at the moment.

It's been around since 1953, though in 2007, it began to do something strange. It began to move, and in more recent times, it started moving towards the Union Pacific railroad tracks and State Route 111. It gobbled up some track and a wall that was built to stop it and forced Cal-Trans to move highway 111 one hundred feet West. So now it's gained the distinction as the world's only moving geyser.

Safety issues prohibit you from stopping to look at the "Niland geyser." Though, as mentioned before, many other mud geysers can be safely visited, provided you keep your distance and remember, it's a boiling pot of mud that can scald you or worse.

As the Salton Sea continues to recede, more mud pots are exposed every day; they're a bizarre sight to behold. Though this brings us to our next stop, a place called Red Hill or Island, in the Salton Sea, though the sea has receded so much, it's no longer an island. It looks like a mound of mud, but it's part of a volcanic system, the only one in California. A great spot to visit for the more geologically minded road-tripper, especially with the San Andreas Fault's proximity. If you're going to exit your vehicle in these parts, carrying water is recommended.

Another quirky spot a few miles to the south of the Salton Sea in the town of Calipatria is the Sea Level Flagpole. Once claimed to be the tallest on earth, it's 184 ft. tall, the exact amount of feet the town itself is under sea level. With the point being, if not for a rise of land in Mexico barely above sea level itself, the Sea of Cortez would rush in, filling the Salton Sink Basin, the town of Calipatria, and most of the Imperial Valley, to the top of the pole with seawater. According to a plaque at its base, it's dedicated to, a bit ironically, "Good Neighborliness."

Our next stop takes us northwest across the low desert into the high desert, where it meets the mountains at Anza-Borrego State Park. A ruggedly beautiful part of the desert named for the Bighorn sheep that inhabit the area. With over 640,000 acres of stunning vistas, canyons, and wildflowers, there's plenty of space to find your little piece of solitude and appreciate the dramatic beauty that California wraps us up in. It's also a great place to take the family camping, hiking, and bird watching. With elevations from below sea level to over 6,000 ft. the views are spectacular, especially the sunsets. Recently, in 2018 the International Dark-Sky Association recognized Anza-Borrego's dark skies and the fantastic view of the Milky Way as a natural resource and certified Anza-Borrego as an International Dark-Sky Park. They have several programs throughout the year for Dark-Sky activities.

West and into the mountains of San Diego County is where this particular SoCal road trip comes to its terminus. In the Cuyamaca mountains, the road wraps itself around, up, and through the mountains in an exhilarating drive that is almost the main attraction. Traveling through the beautiful mountainous communities, you arrive at the small town of Julian, where you can have some of its famous apple pie and enjoy the spectacular old-time charm of the community, which is the newest member of the International Dark-Sky community.

If you find yourself there on July 31 from 11:00 am to 5:00 pm, enjoy their Sip of Julian 2021, a town-wide event. Enjoy samples of beer, wine, hard cider, and craft cocktails, along with a small bite-food pairings from what is promoted as “some of the best tasting rooms” in Julian! $35 per person

Another treat is their annual Apple Time Teas which takes place Thursday September 23rd through Monday September 27th. The set menu is an Apple Themed version of our four course Cottage Classic Tea, including a cup of soup with mini cheese scone, apple themed finger sandwiches and savories, scone with curd, apple butter and whipped cream, and apple themed dessert.

For the leisurely-minded folk, on September 25 from 6:00 a.m. to 5:00 p.m., it's their 21st Annual “Fishin’ in the Pines” at Lake Cuyamaca. Their kids fishing derby welcomes back children ages 3 to 15 to compete for kayaks, trophies, bikes, fishing gear and more. It's sure to be a suite time! Find details at visitjulian.com.

A few miles down the road is the perfect place to end a road trip--the Santa Ysabel Indian Mission. An old relic of the California Mission period was founded in 1818 to be a kind of sister mission of the Mission San Diego de Alcala in San Diego. It's a nice, quiet place to show the family or visit in solitude and collect your thoughts among both the artificial and natural beauty of Southern California.

So, wherever your summer road trip takes you, make sure you leave it beautiful for future generations of Southern Californians to enjoy and appreciate.