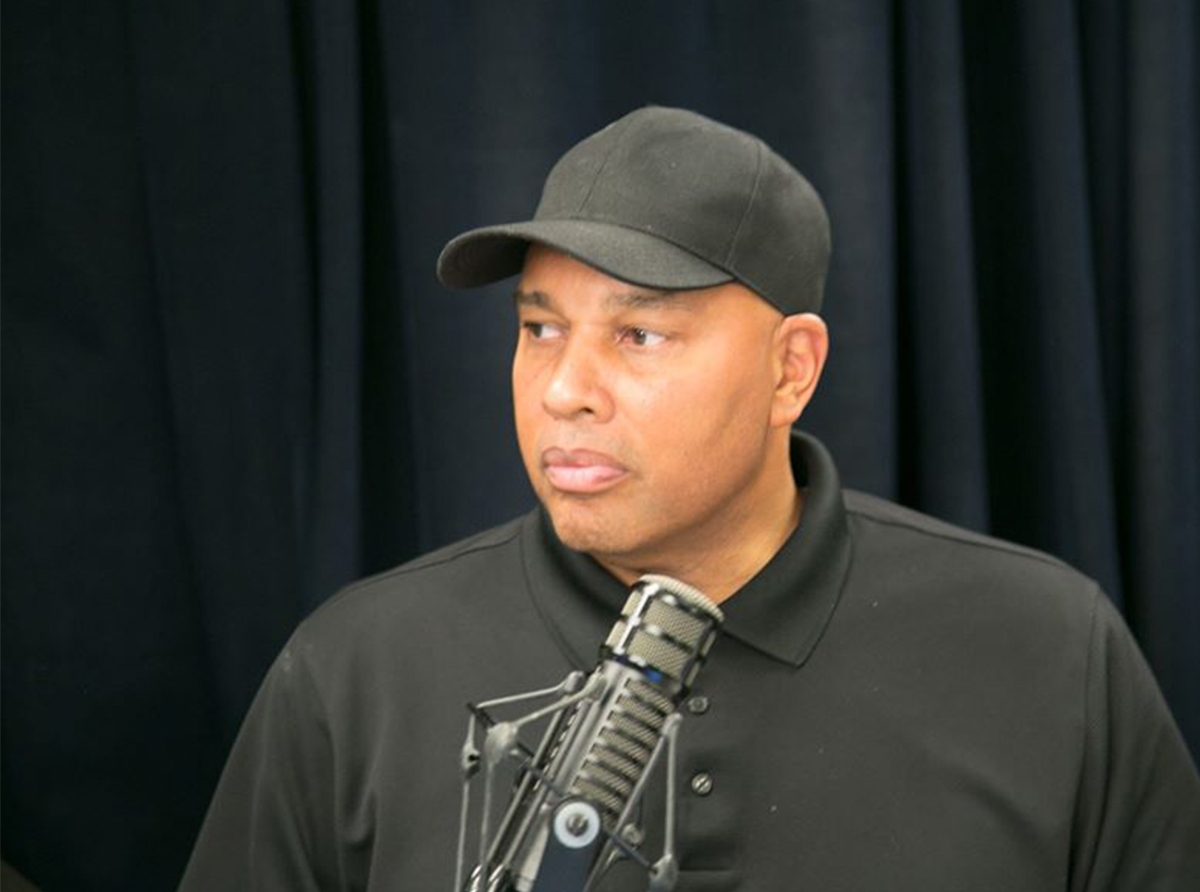 The recent podcast boom has democratized the genre, bringing many excellent shows to the new internet airwaves. This year's listeners have found excellent podcasts of multiple types, including pop culture, business, lifestyle, and mental health. Local podcasts introduce a slice of life for many different cultures in Los Angeles.

One podcast that stands out is "We Luvv Rare Grooves," the [music] internet show founded by Clifton' C Mose' Moseley. Moseley, a Pittsburgh native, pays tribute to soul and R&B by preserving the genre, keeping it in the public mind, and giving flowers to its legends.

Each week, Moseley and his co-hosts DJ DeVoux, Xiantoni Ari, Greg Sneed, Robert A. Brown, and DJ Regg, play a bounty of ballads from the 70s, 80s, and 90s, that don't usually make it on today's smooth jazz stations. They highlight both the B-sides of legends (Earth, Wind & Fire; Ohio Players; Delfonics) and rare one-hit wonders (Dynamic Superiors, DJ Rogers, Sweet Thunder). They broadcast live on Monday nights from UBNGO Radio in Burbank, and their archives are available on podcast platforms, including iHeart Radio.

The show brings its audience a traditional radio show that focuses on Black music and entertainment, with conversation with the hosts interspersed between the songs. They also conduct interviews with R&B legends, with pasts guests including Dionne Warwick, Lou Price of The Temptations, Reggie Calloway, Bonnie and Anita Pointer of The Pointer Sisters, Chante Moore, Mark Woods, Jr. of Lakeside and Stanley Clark.

Moseley's dedication to sharing music started when he was a kid, making mixtapes in high school in the days where Columbia sold 13 records for a penny. He began his career at WAMO in Pittsburgh and went on to a long career in sales and sales management. He's also involved in the Los Angeles chapter of the National Sales Network.

In his bio, Moseley describes "We Luvv Rare Grooves" as a chance to "do my part in preserving R&B music." He said, "As 'We Luvv Rare Grooves' comes to take a life of its own, my team and I look forward to keeping our listening audience on the edge of hearing never released music and taking you on the musical, magical journey down memory lane as only music can do."

On Friday, February 14, 2020, We Luvv Rare Grooves will host a lovers' Valentine's Day Concert featuring Grammy-nominated R&B singer, Michael Henderson at the Miracle Theater located in Inglewood at 226 S. Market Street. The Celebration of Love Concert will open its doors at 8:30 p.m. Listen in to We Luvv Rare Grooves on Monday nights at 8 p.m. for updates and special promotions. Tickets are available at themiracleinglewood.com.  +

Check out below our Suite Picks of other notable Los Angeles-based podcasts, selected by Suite Life SoCal.

30 SOMETHING, BLACK AND GAY

For nearly four years now, the three co-hosts of this witty, smartly opined podcast tackle hot topics, entertainment gossip, and current events like no other. No topic is off-limits, as they have covered Jussie Smollett’s alleged attack, Lena Waithe’s disapproval of Black Hollywood A-Listers not financing more independent projects, and debating the price we pay when defending controversial cultural legends such as R. Kelly and Michael Jackson, among others.

For all of the gamers and geeks who want to stay plugged into industry news, media releases, and new comics being pubbed, this is the podcast for you. Sharing updates on the games they’re playing, and the latest anime drops, the collective comprised of Kronus, Cthulu’s Prodigy, Blue, Old Ninja, and Stitch engage heavily with their loyal and rabid fan base who tunes in each Wednesday for their latest updates.

With a tagline like “Dismantling Shit While Talking Shit,” it is abundantly clear that both Cassandra and Rubén, co-hosts of this popular Latinx/Chicanx podcast, are holding nothing back when tackling social, political, emotional, and community issues. Recently featured on Oprah.com, be sure to check out some of their more recent episodes where they discuss their disappointment with Beto O’Rourke buying into whiteness, defend their Valley Girl accents, and outline mental health.

Essentially, an interview series created by Chris Denson, an award-winning innovator, and marketer, Denson spotlights technology innovation and disruptive business models by having candid conversations with the dynamic individuals attached to the projects. With nearly one million subscribers tuned in to his weekly episodes, this one-stop-shop provides almost anything you may possibly need to know.

Jayce Baron and Shar Jossell host KISS & TELL RADIO, bringing nuance conversations to the black LGBTQ+ experience. From pop culture and politics, to dating and sex; the unique transparency of #KATradio discussions generate broader ripples of thought from perspectives that are rarely heard.

Bridging the gap between academia and real-life experiences as Latinas, mothers, daughters, partners, and women, these two Cal State professors of Women, Gender and Sexuality studies have made quite the splash since their Summer 2019 debut. Already having secured a feature on Oprah.com, the topics range from reproductive justice, social justice, motherhood, sexuality, race, gender, and more. With fifteen episodes already under their belts, they are showing no signs of slowing down.

What happens when you approach strangers in various SoCal swap meets with a single request, to share a little something about themselves? Luis Octavio does just this throughout the region, featuring stories from locals while finding amazing treasures along the way.

SHE BUILT IT PODCAST WITH MELANIE & DR. MICHELE

She Built It was created with the working woman in mind, supporting her entrepreneurial and career growth and success. Encouraging women everywhere by sharing stories, resources, tips, and professional guidance, both Melanie and Dr. Michele pack a wealth of knowledge into each 15-20 minute episode. Whether you’re tuning in during your commute while working out or running errands, every Tuesday, these two are on a mission to help all women make their next leap.

Co-hosted by Dimitri and Ashley Snowden, Angelenos, who practice an unconventional lifestyle with their plural family, their weekly podcast focuses on powerful and shifting conversations to explore the roots of who we all are. Packed with special guests each Wednesday, topics range from parenting, ego, infidelity, neuropathic living, dismantling stereotypes, and everything in between.

Join sisters Bricia and Paulina every Tuesday where they take a break from Guelaguetzla, their family’s Oaxacan restaurant, to interview experts, friends, and each other. Focusing on topics ranging from raising bilingual children, maintaining fitness regimens, coping with mental illness, travel tips, and stories of inspiration, these super mamás are building this online community one episode at a time.

Self-described as using “levity to inform, inspire, and impact our community” co-hosts Ana Sheila Victorino and Brenda Gonzalez—two #EducatedPeleoneras—focus on the intersection of politics, pop culture, race, and identity in the Latinx community. Having been featured in several publications including Oprah Magazine, mitu, Remezcla, Latino USA, and Latina Magazine, among others, Tamarindo is one of the most popular Latinx podcasts out right now.

Thank You MA’AM Productions, a woman-owned production company presents, The Breakthrough an internet television show starring host, indie artists Sophina De Jesus aka “Sophina The Diva” and Hanif Carter aka “BillionAir Carter.” The Breakthrough discusses trending indie topics, interviews indie artists both established and up and coming while going into the streets to discover what it means to be indie. The Breakthrough can be seen on YouTube on The Thank You MA”AM Productions channel. Watch, Like, Share and Subscribe.

How Local and Diverse Businesses Support the Super Bowl: An Interview with Chincie Mouton