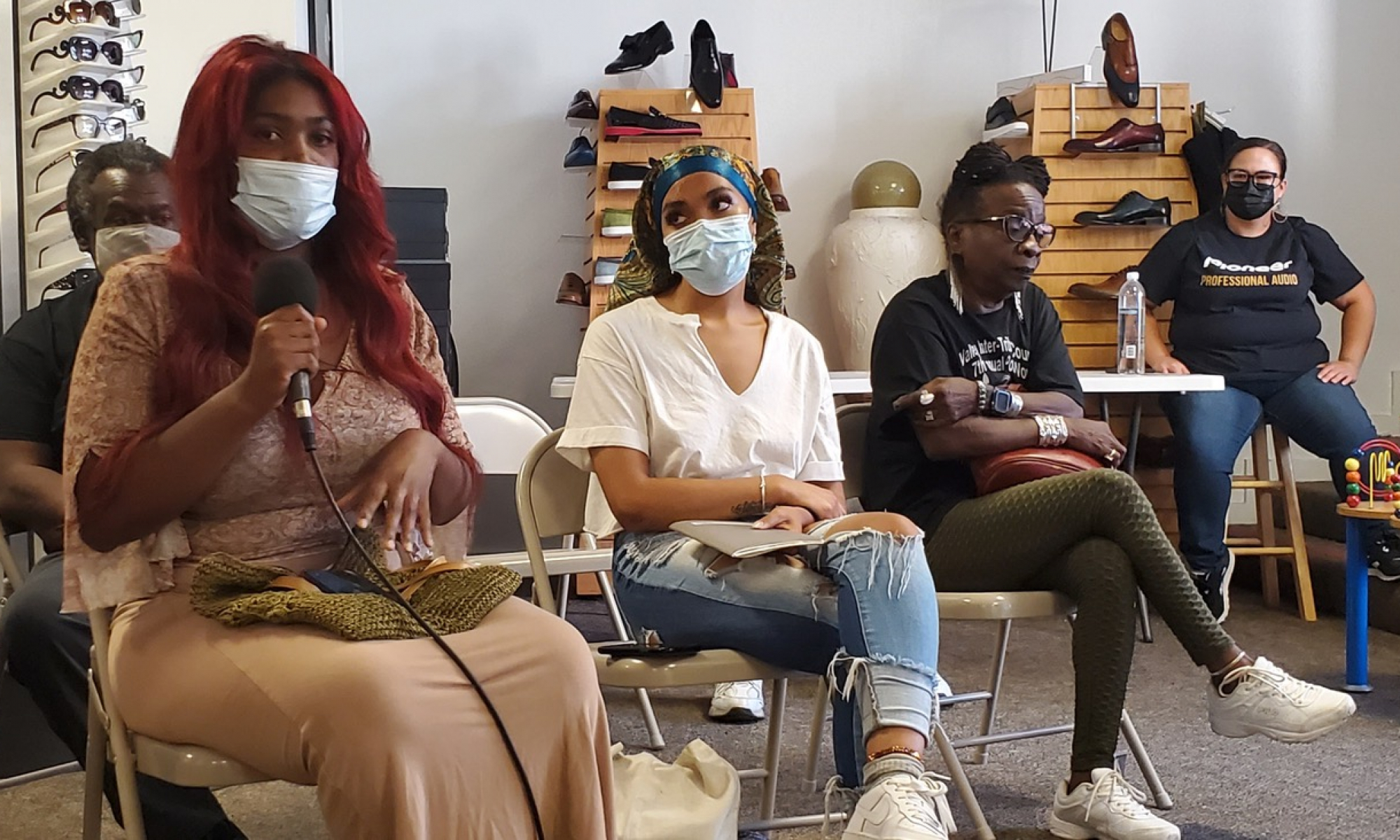 By
California Black Media SuiteTalk 2022-09-13 Hits: 243
Vallejo's Black community voiced their concerns and opinions about reparations at a listening session held in the heart of the city north of San Francisco. Shown left to right are Justice Alford, Kahalla Bandy-Pasibe, and Askari Sowondae participated in the discussion held at Black-owned LaDell's shoe store in Vallejo, Calif. (CBM photo/Antonio Ray Harvey).

A series of community Listening Sessions are being held statewide to help the nine members of the California Task Force to Study and Develop Reparations Proposals for African Americans better understand how laws and policies that contribute to perpetuating the effects of slavery have negatively impacted Black Californians.

“What (Reparations) must do is bring about this sense of recognition,” said Lewis, who is a member of the California Reparations Task Force.

“One of the things that the (Task Force) has accomplished so far over the past year is to bring about a sense of recognition for the Black American community in California and the country overall,” Lewis told the online audience.

CJEC is a state-wide coalition of organizations, associations, and community members that support reparations for Black Californians who are descendants of enslaved Black American men and women. CHC is a Los Angeles-based nonprofit committed to practices advancing justice, equity, diversity, and inclusion to achieve sustainable policy and systemic change. 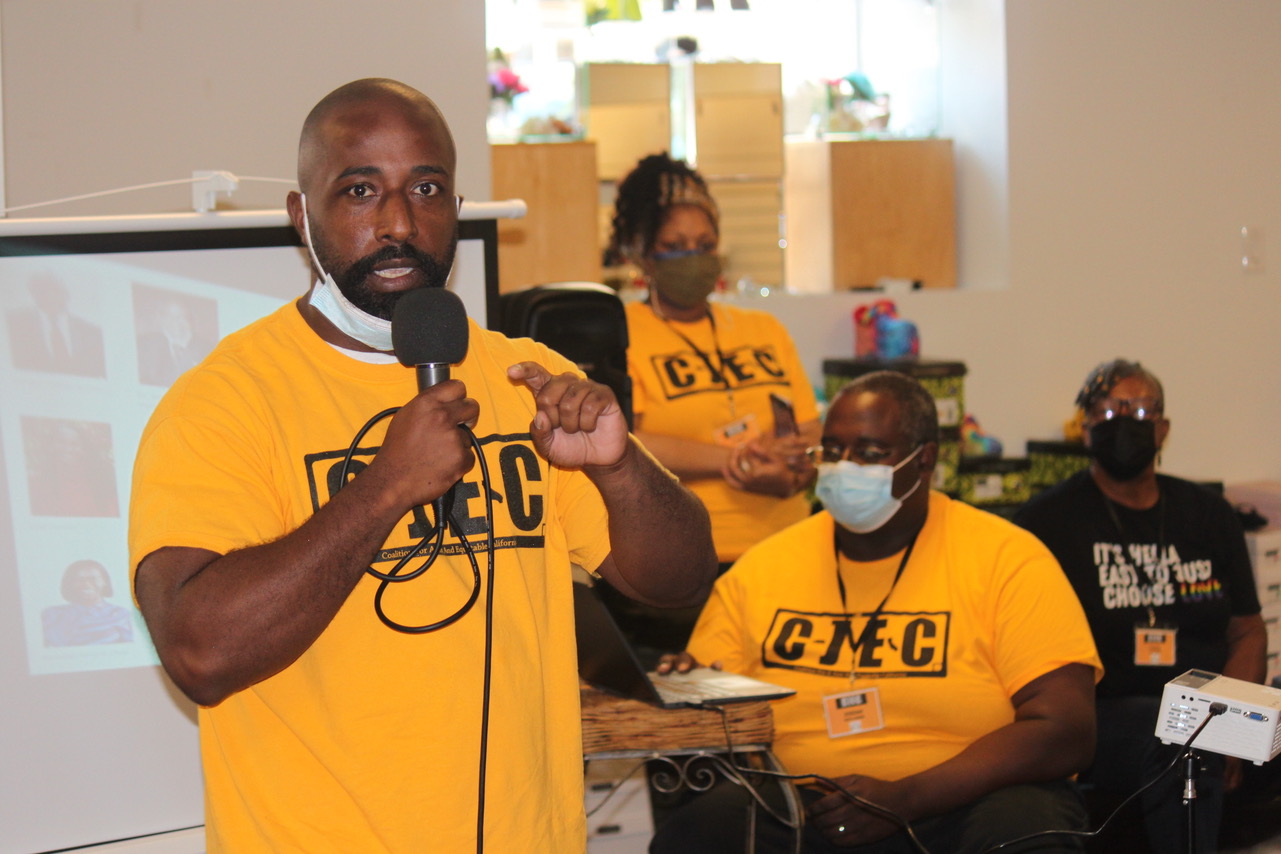 Chris Lodgson and members from CJEC hosted the listening sessions in Vallejo and Sacramento on Aug. 20. CJEC is one of the anchor organizations sanctioned by the California Task Force For Reparations. (CBM photo/Antonio Ray Harvey).

A sanctioned in-person community listening session was held in the city of Vallejo. It was hosted by CJEC with the support of the state’s Department of Justice (DOJ) and the Black Women Organized for Political Action (BWOPA).

The event was held at Black-owned LaDells Shoes in downtown Vallejo. Personal testimony of adversity and success rooted in the Black experience in and around Vallejo were shared during this session. Struggles with employment, decent housing, racism in public schools, homelessness, police brutality, and the challenges of maintaining a business were covered.

“In May we had our first community conversation about reparations (in Oakland, Calif.) and it was an overall history of reparations in the United States,” said Dr. Kerby Lynch, who recently received a doctorate in geography from the University of California Berkeley. “This session is about what reparations look like for Vallejo. We are here to listen to one another's stories and record these testimonies.”

Vallejo is one of the cities in the state with a modest population of Black people who are fighting for recognition during the reparations proceeding. It does have an abundance of Black history to be shared.

The third listening session hosted by CJEC was held

At the Sacramento listening session, the community testified about how to build small businesses, Black people's “Great Migration” from the deep south to the west coast, how the Freedman’s Bureau model can be used to determine reparations, and Black pioneer’s presence during the Gold Rush. 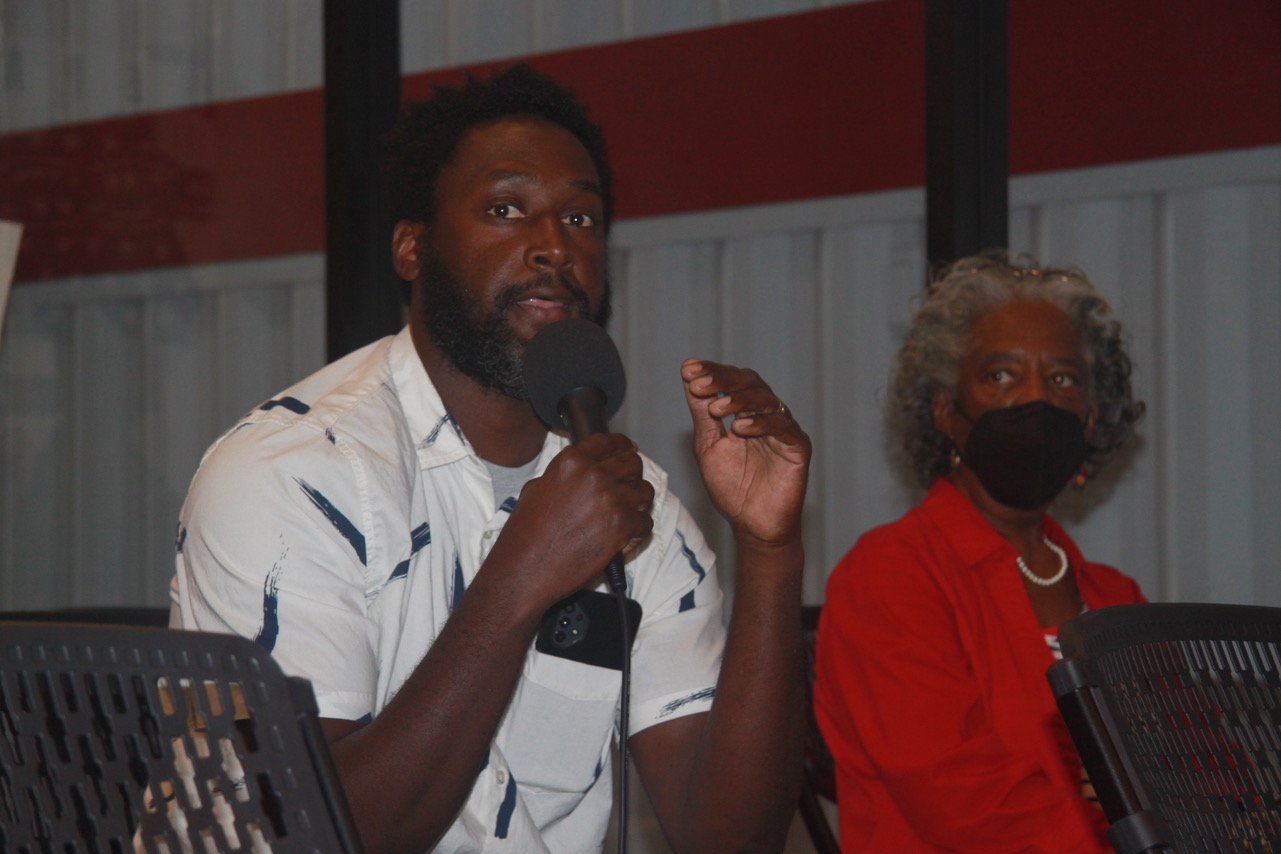 The community listening sessions are being conducted across the state by the Reparations Task Force’s seven “anchor organizations.”

The listening sessions are designed to ensure certain communities around the state have the opportunity to provide their thoughts and concerns about the work the task force is doing.

On June 1, 2022, the Task Force issued a 483-page interim report to the California legislature. The report surveys the ongoing and compounding harms experienced by African Americans as a result of slavery and its lingering effects on American society today.

“It’s a sweeping indictment,” Tamaki said of the report during the Sacramento community listening session. “It connects the harms of the past and follows the consequences that we face today. There have to be legislative remedies.”

The interim report also includes a set of preliminary recommendations for policies that the California Legislature could adopt to remedy those harms. A final report will be issued before July 1, 2023.