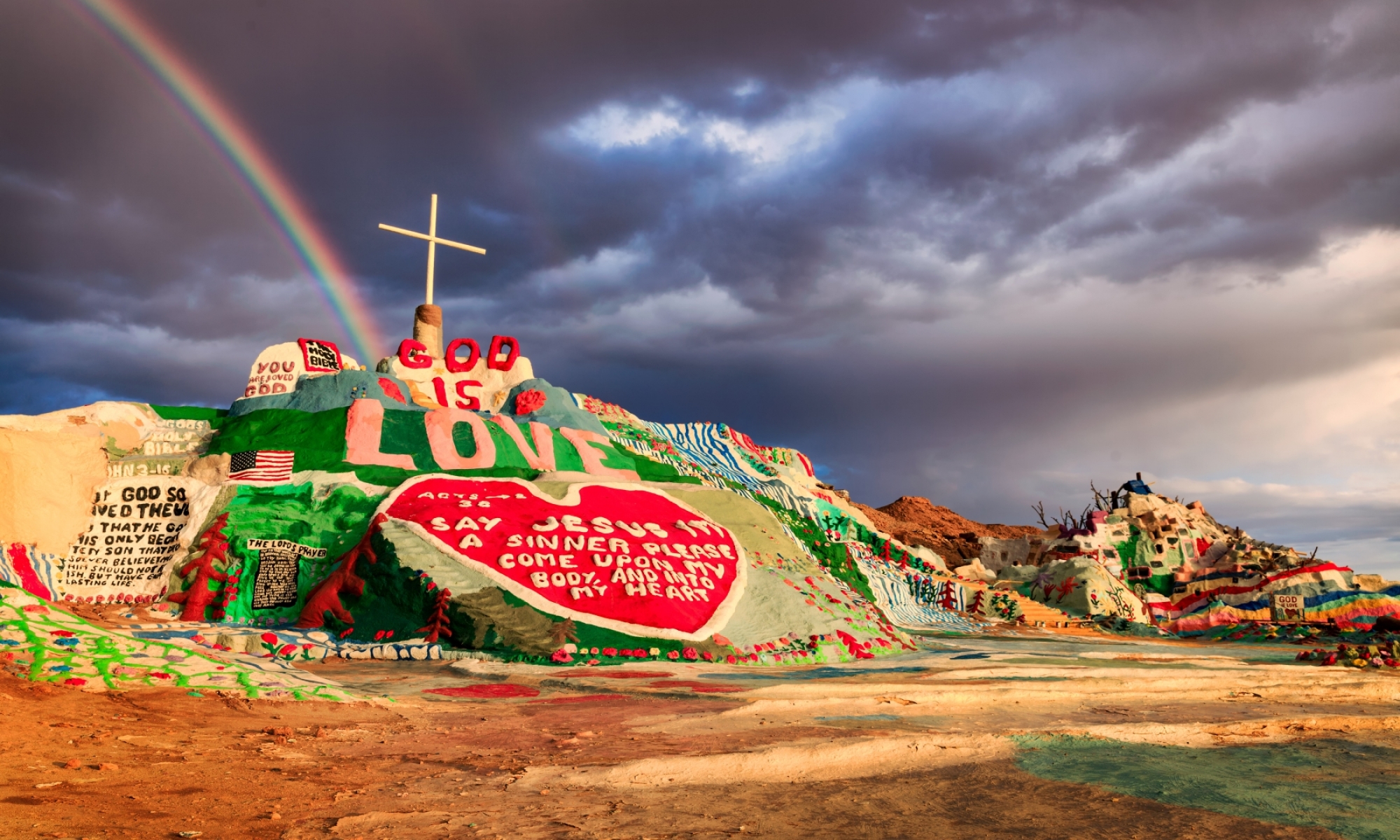 Somewhere down in the SoCal hinterlands, between the Salton Sea and the Mexican border, there is a sun-beaten patch of desert that enjoys folkloric status, Slab City. Formerly belonging to the Military, it was a Marine Installation called Dunlap. Though not for long, the base was closed after it was used for training troops during World War II and given back to the State of California in 1961.

Eventually, all the military structures were torn down, leaving only the foundation slabs on the old installation, giving the place its name. The area became a favorite wintering spot for "Snowbirds"—usually retirees from the Northern U.S. or Canada- who flocked there every year. Some of its first "permanent" residents were thought to be field laborers, though, for some reason, it became a year-round haven for artists, writers, dissenters, and plain old eccentrics; the Military never really left the area either.

The Sonoran Desert bloomed an off-grid community that has so far stood the test of time. Slab City and its iconic Salvation Mountain, created as a passion project by Leonard Knight in 1989, have become a place of legend and myth in the minds of most people around the world. Where there are no laws, no bills, and a person is free to claim a homestead, park your R.V. there, walk down the road and see Leonard working on his ever-changing mountain.

The truth is a bit less glamorous. Leonard has since passed in 2014, but not before putting 30 years of work into his mountain of God and love. It was named as a National Folk-Art site in 2000. In 2002 the Congress named it an official National Treasure; it also made cameos in video games and movies, most notably, "Into the Wild." The Slabs and their famous mountain are introduced to most people through the internet and social media. YouTube has made stars of the mountain and the desert community, which is a blessing and a curse, especially for its permanent residents in today's world of Pandemic.

Yes, the Coronavirus' deadly tendencies have reached the land of ideals and freedom, and therein lies the problem. How do you explain to people used to living off-grid in "the last free place in America" to social distance and stay in-doors? The residence, accustomed to living free, have created traditions like "The Range," a music venue. Every Saturday night, people from the Slabs and surrounding Imperial Valley communities would come out, get together and listen to live Range music all night. Musicians from all over the world play, and you could meet anyone in this place, from artists, Rastafarians to Navy Seals. It's been described as "one of the coolest venues in the world." Saying goodbye to this venue is huge for residents.
Their tourism-based economy and semi-nomadic lifestyles make the thought of the Slabs going into a lockdown about as unimaginable as snow in the desert. As unimaginable as it was, social distancing was attempted. You could go on social media on one of the many Slab City community pages and see the local businesses attempting to notify patrons. A sincere effort was put forth, but in "the last free place in America," some birds are too wild and colorful to cage.

The times I've spent out in this wild place, with artwork in every nook and cranny, was at the homestead of a childhood friend, Abel Barraza -- a man who raised a family out there and knew the meaning of struggle. In the very beginning of the Pandemic, before we knew the seriousness of the thing, it was still the free place I was used to. Realization set in when Salvation Mountain and the Range Stage closed. No more Saturday nights. They tried to adapt; to this day, "The Range Underground" shows online Saturday nights.

The closings were shocking, but not a huge change due to the Valley's brutal heat; Slab summers are usually quiet. The real question was: would the tourists and snowbirds return during the fall and winter "money" seasons? It's an essential question to the permanent residents. While talking with some of the community leaders, Wanda Whitlock and Andra Slaburbia, the answer was "yes." They are coming in droves. Salvation Mountain even opened back up with the rest of the county.

Ms. Whitlock, who wears many hats in the community and had just finished erecting a free water tank in front of their place with her friend Jerry "the water guy," told me, "The snowbirds that come in are being really good about self-quarantining [for] 14 days." Which makes sense seeing that they're an older population, more concerned with their health and that of others.

Though speaking with Slaburbia, she let me in on what she called "Andra's little theory," saying: "The Slabs have been largely spared from the virus, for some reason. There are many people, the ATV types, who don't wear masks or social distance. We think it's due to the warm climate and the fact that most gatherings are outside in the open-air." Then she expressed the fear that the winter would force the masses inside to confined spaces and turn this place into the next super-spreader. She seemed to be mentally preparing herself for the worst.

No matter what happens, this place is as unique in the world as are its people. I am sure Slab City will endure this Pandemic like they endure all things with self-reliance and toughness, but it won't be easy. Whatever your stance on personal liberties and mask-wearing, it should be recognized that there are real people here who care about life and take their freedoms seriously.

If you find yourself in the area in need or just want to donate, the City of Niland has monthly food drives at the Niland Chambers. Whitlock can be contacted through the many Slab City community pages or by calling (760) 442-2019 to receive donations of daily necessities, food, and water. Slaburbia can also be contacted through the Slab City community pages to donate pet food, pet toys, and even vaccines for her free spay and neutering clinics for the many pets of the Slabs. Donations can also be given through slabdogsunited.org or their sister organization S.O.A.R.

Black Music Month with MOJA: A Music Saga of the History of Black Music from Africa to America featuring Blues Hall of Famer Billy Branch and Actor Darius McCrary