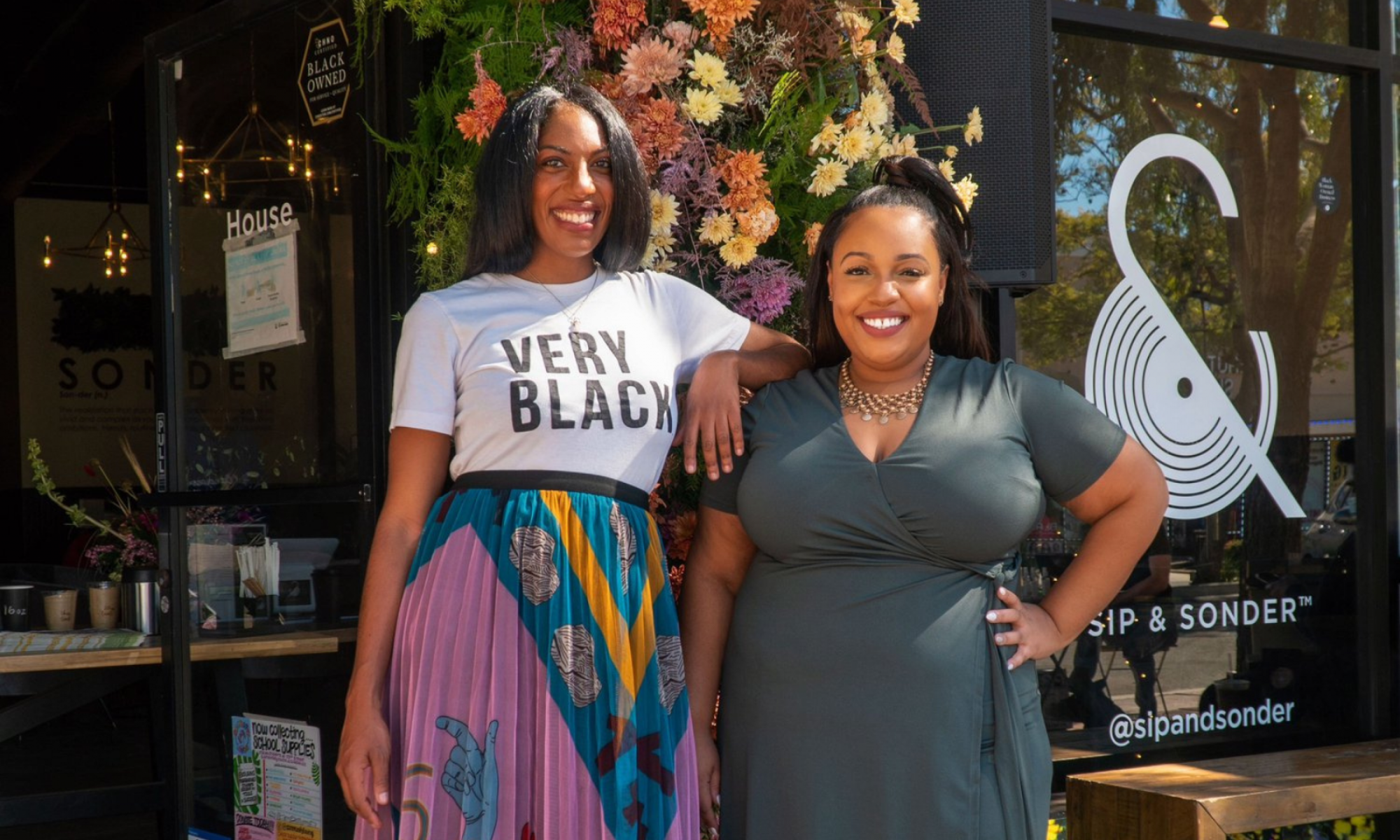 Since bursting onto the scene in 2017, Sip & Sonder has emerged as a pivotal anchoring business on Market Street in downtown Inglewood.  A bustling coffee shop and roastery, the local gathering spot aims to be “where coffee, community, and culture truly connect.”

It all started back in 2015 when co-owners Amanda-Jane Thomas and Shanita Nicholas relocated to LA from NYC in the hopes that their entrepreneurial aspirations could be fully realized in the City of Champions. Attorneys, by practice, the Ivy League grads were eager to make a difference and be a part of something bigger. Inglewood did not disappoint. After joining a local meetup group, it wasn’t long before both Thomas and Nicholas recognized the wealth of opportunity simmering just beneath the surface.

“[Sip & Sonder] was a response to the great amount of talent and creativity in the community, lack of outlets for expansive expression, and hurried gentrification that ultimately led to disgruntlement and displacement,” they shared with Essence.  After taking over the meetup group, which ultimately evolved into the nonprofit Sonder Impact, the duo began hosting pitch competitions and other community events, learning what was needed and desired in the area.  After beginning construction on their flagship building in 2017, by the end of the year, Sip & Sonder was open for business.

Upon entering the airy shop, you are immediately greeted by the rich scents of coffee wafting throughout as the rhythm of soulful music hums from the sound system. Bold mosaics and artwork adorn the walls, while cozy seating nooks are scattered throughout. Your eyes settle as you notice various patrons hunched over their piping hot cups, quietly sipping, enjoying the vibe. “At our core, we are built on coffee, community, and culture,” Thomas said in the Building LA. “The whole point of it all is how are we keeping our finger on the pulse and having those moments that are meaningful to our community, that our community can identify with?”

The duo has invested much of their efforts beyond just Market Street. During the height of the pandemic, when price gouging and access to their coffee suppliers were running low, the two invested in a roastery to complete this production of their business on site. They also partnered directly with a coffee farming family in Rwanda. “There’s a storytelling aspect of the company, to share other cultures that are connected to this product and process,” explained Nicholas.

Today Sip & Sonder roasts all of their beans in-house, creating unique flavor profiles they ship worldwide. They have even branched into wholesale, counting the retail-giant Target.com as one of their customers.  Late last year, their second location opened, across from the Disney Music Concert Hall in DTLA.  “I love how they stay true to connect with community,” gushed Genisa Babb, a frequent visitor of the flagship location. “It always feels warm and inviting, but they also have really great events that showcase different types of Black culture.”

Another key component to their community work includes Sonder Impact. “We’ve expanded beyond entrepreneurship to include well-being,” said Nicholas. “Keep it Run Hundred, founded by Buttah, a maverick in the south LA ecosystem, has been incredible.”  When considering the impact of their highly respected pitch competitions, multi-million dollar skincare company Topicals comes to mind. “They won first place at our pitch contest several years ago. They went on to complete their million-dollar seed round, and today I see them on billboards!”

Upon reflection, the duo is visibly moved by the impact they are making. “We really understand the value of space. It’s the space to share your ideas, to get feedback, to network, to get customers, and to make friends.”