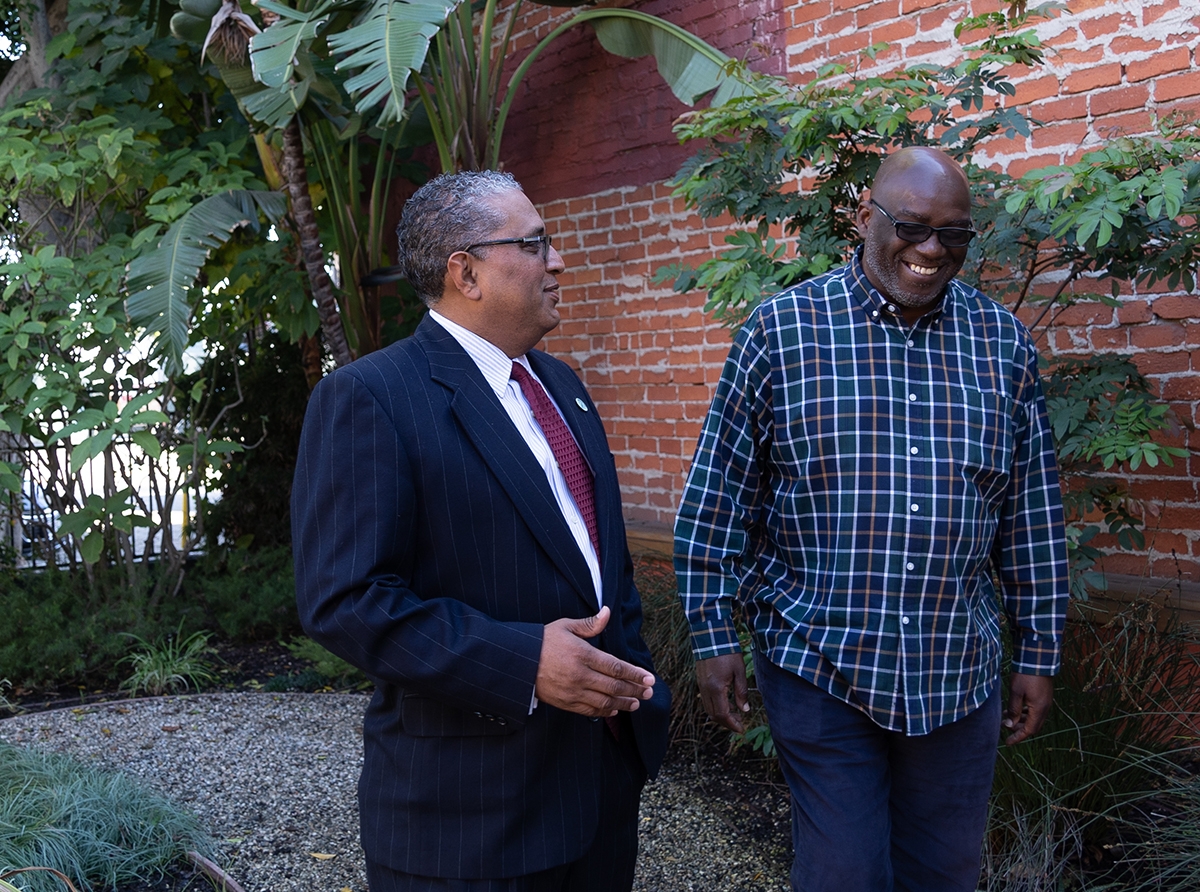 An elaborate quilt hung on the wall crafted with messages of love, hope and unity from the youth supported by the programs of Community Build, Inc. is used as both to adorn the wall behind the receptionist as well as a constant reminder of the work Robert Sausedo and his committed staff tirelessly does each year.

In April 2019, Sausedo was welcomed into the position of president and chief executive officer to infuse new and strategic objectives into the nonprofit organization's goals that are aimed towards the “revitalization of South Los Angeles through human capital investment, community economic development, and commercial economic development,” as their website affirms. “When we talk about revitalization that word really should say 'bringing hope to South Los Angeles through capital development' – it's a part of our mission,” Sausedo said.

Community Build focuses on just that: community. As a component of revitalization, the nonprofit is responsible for several programs geared at assisting those in need, something that Sausedo was familiar with as an assistant pastor at Los Angeles Community Church. Before finding himself at Community Build, Sausedo was employed as deputy of Agency Review and Support for the Office of Los Angeles County Board Supervisor Mark Ridley-Thomas and had plans to become a senior vice president of government affairs in the insurance industry.

“As God was working on my heart, this opportunity came up, and it seemed to be a much better fit for what I was doing in ministry, so I got derailed from my original plan and was recruited,” Sausedo said.

Many of the programs that Community Build provides are pointed to at-risk youth and work toward providing the necessities to ensure an improved quality of life. Leon Gullette, vice president of the Gang Reduction and Youth Development Intervention Services, oversees the program that provides resources including employment advising, mental health services, and academic counseling. Gullette's experience boasts a concentrated history in intervention having developed the Los Angeles City Council President Herb Wesson's “Project SAVE” program as well as contributing to the 1992 Los Angeles gang truce movement.

With his 27 years of experience, Gullette hopes that his staff can “understand the seriousness of intervention and the things we need to be doing with [their] clients.”

“We do whatever it takes to help the client get to where that person should be,” Gullette said. “It's actually catered to each individual that comes in, and we help the individual on a case-by-case level and that way we're able to really be effective in helping that person and not just throwing them into an anger management program, which they might not need.”

Another program of Community Build is the Gang Reduction and Youth Development Prevention Services, is intended to decrease the likelihood that youth from the ages 10 to 15 will become involved in gangs.

As a child, Sausedo grew up in the Los Angeles area living in both Jefferson Park and Arlington Heights. He said that these roots in the City of Angels make his position a personal but rewarding one.

Sausedo's history with community affairs is not new and spans back over 30 years ago. After the 1992 Los Angeles riots, Sausedo, alongside his colleagues, conducted a rebuild and expansion effort of the Jefferson - Vassie D. Wright Memorial Branch Library.

“I've always been engaged in community, but to be in this role now serving the community in a way that makes a difference this is not work to me anymore,” Sausedo said.

Due to his private-sector background, Sausedo said his corporate experience brings a unique perspective to Community Build.

“I know that what's missing in most community-based organizations is being able to break through that chasm of thinking like a nonprofit but thinking more like a business and running it like a business that is focused on revenue and people development so that we have long-term stability,” Sausedo said.

Community Build's headquarters is located in Leimert Park Village, the cultural epicenter of the Black art scene in Los Angeles. Considering the construction due to the upcoming Leimert Park Metro line and the announcement of Destination Crenshaw, an outdoor art museum, concerns of unwarranted change to the neighborhood have come to light.

“There's the conversation of gentrification right?“ Sausedo said. “I'm counting on the fact that Leimert Park will become a priority area for further development, and that development will also include [incorporate] Leimert Park as the continued center for African American culture,”

With the inevitable changes these projects will bring, Sausedo said he hosted a community forum in collaboration with the Department of Culture Affairs to create a dialogue with the small businesses in the area.

“One of the things I shared with the mayor's office is that as we look at the businesses, we really have to be clear about what's a hobby and what's a business so that as we help people think towards their future or the future of what the businesses should be in Leimert Park, that we… either help elevate those who are here into scalable businesses that make sense, that can hire people and produce revenue or bring that into Leimert Park,” Sausedo said.

As of now, Community Build has unspecified plans to become involved with Destination Crenshaw “at some point in time” in the future, according to Sausedo.

Nevertheless, the future of Community Build promises projects that reinforce the goals of the organization. Sausedo plans to continue expanding Gullette's Intervention program, introduce new sources of income, including ventures into three “social enterprises” including a co-owned restaurant, a landscape maintenance business, and a digital robotics company. Sausedo noted that the projects are intended to “touch all of the markets from entry-level employment to those more sophisticated that could fall into a coding space, etcetera.”

“We anticipate our corporate headquarters will be redeveloped over the next five years into additional commercial space and housing, but a for-sale product is what I'm looking at,” Sausedo asserts. “We have great plans for Leimert Park, and we have plans to really be part of the transformation of what Leimert Park will be and how it will report to the rest of Los Angeles.”