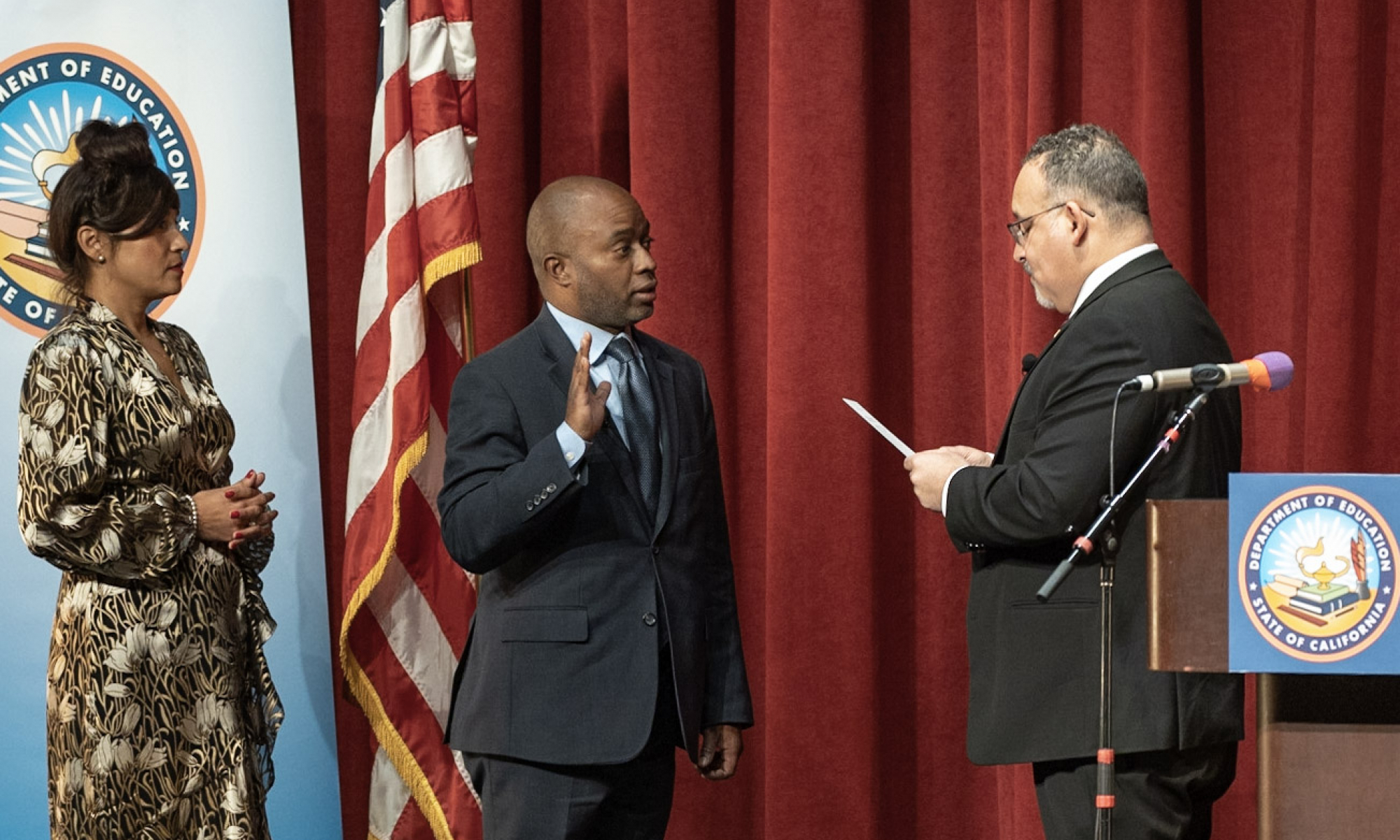 State Superintendent of Public Instruction (SPI) Tony Thurmond took the oath of office to begin his second term on Jan. 7 at a ceremony conducted at Robert F. Kennedy Community Schools in Los Angeles.

Thurmond oversees the education of 6 million PreK-12 students in over one thousand public school districts across California.

Although SPI is a non-partisan office, Thurmond drew support from many of the state’s top Democrats in his bid for re-election, including from Gov. Gavin Newsom, Los Angeles Mayor Karen Bass and several members of the California Legislative Black Caucus. He was also endorsed by unions across the state, including the California Federation of Teachers and California Teachers Association.

United States Secretary of Education Miguel Cardona performed the ceremonial swearing in of Thurmond, who then reflected on his path to the office. The son of a Panamanian immigrant mother and Vietnam veteran father, who did not return to his family after the war – Thurmond and his brother were raised by their cousin and relied on public assistance programs and public schools to make it out of poverty.

“I am standing on the shoulders of those relatives who struggle and sacrifice so that we could have a better life,” Thurmond said after he was sworn in. “It was the sacrifices of teachers and classified staff and childcare workers and school administrators who make it possible for me to stand here today as your public servant fighting for 6 million students in the great state of California.”

Thurmond’s first term coincided with one of the most tumultuous periods in California’s history -- a time, he says, that brought with it many unforeseen challenges.

“We all watched it together. The lives lost and impacted and disrupted by the pandemic,” Thurmond said before pointing out other cultural, social and political developments the country endured as the COVID-19 crisis intensified.

“The killing of George Floyd, fighting hate against the Asian American Pacific Islander community, racism targeted directly to African American families, anti-Semitism, the mistreatment of Latino families, immigrant families, we have seen so much hate all in such a short period of time that we would move into a pandemic and find out that, in a state with all the wealth that we have in California, that a million students could be without a computer,” Thurmond added. “That is the most important thing that they needed to be connected in those early days through remote learning.”

Thurmond says his administration stepped up to address challenges presented by the pandemic.

“We know that the impact this has had clearly affected student proficiency levels where they are now compared to where they were a few years before the pandemic and of course, a deep, deep impact on the mental health of our students and our families,” he said.

“We've seen a dramatic increase in depression and anxiety and hospitalizations for children and it has been difficult for them,” Thurmond continued. “But our children are more than the sum of their circumstances. They've demonstrated their resiliency, and they're on the path to recovery, and we're going to help them with that because we just secured enough money to recruit 10,000 counselors for our schools in the state of California.”

The addition of counselors is good news for teachers across the state seeking resources to help their students recover and develop in areas outside of academics where school also plays a crucial role for many students. “I was very excited when superintendent Thurman said that there would be 10,000 counselors coming to the school sites because we need that. The emotional health of our students, that is important, that is very important,” said elementary school math teacher and California Teacher of the Year award recipient Bridgette Donald-Blue to California Black Media. 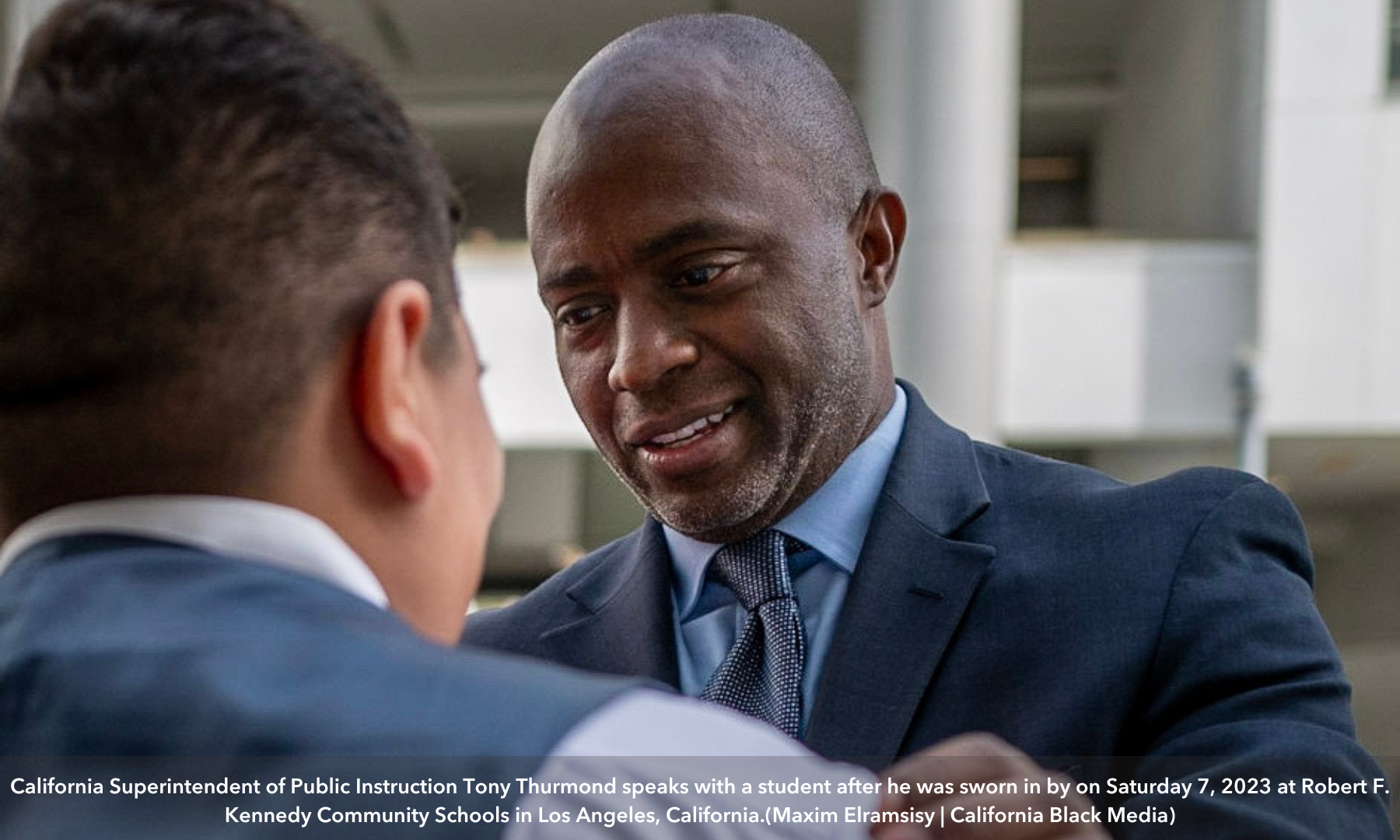 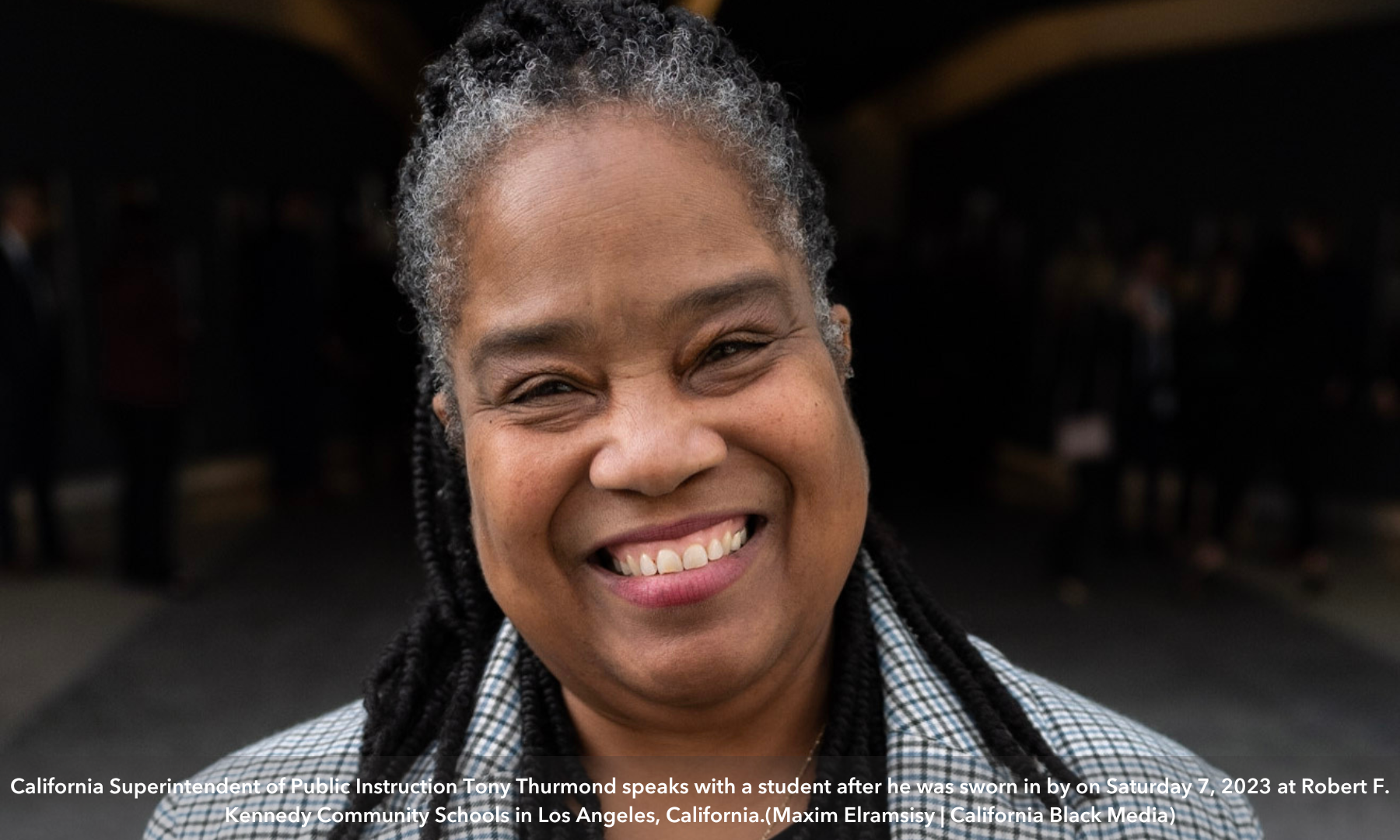 The SPI does not have any legislative role. But Thurmond, who served in the California State Assembly for two terms, sponsored or endorsed several legislative initiatives that may have a profound effect on the future of education in California and the role that schools play to meet the social and emotional needs of students to provide a positive learning environment.

Thurmond says, beginning in the 2022–23 school year, the California Universal School Meal Program will help all students to reach their full academic potential by providing a nutritiously adequate breakfast and lunch at no charge for all children each school day regardless of individual eligibility.

Thurmond also has initiatives to combat inequities in the school system including universal preschool for 4-year-olds regardless of background, race, zip code, immigration status, or income level. He also launched the Black Student Achievement Taskforce to help quantify the impacts systemic and institutional racism have had on Black students in California.

Thurmond points out that he sponsored legislation to increase funding to the lowest performing students, ban suspension and expulsions in preschools, and secured $90 million for suspensions and chronic absenteeism programming.

“I know the impacts of what happens when our students don't learn to read by third grade. Sadly, they end up dropping out in many cases and in the criminal justice system, and we're going to change the narrative and flip the script. We're going to educate, not incarcerate our kids.” Thurmond repeated a pledge for today’s kindergarteners to be able to read by third grade,” he said.

Recently, some education advocates pointed out that there has been a reported wave of retirements and disincentives that have led to an unprecedented teacher shortage across the nation. In response, Thurmond says he is creating new incentives to draw qualified people into the school system to help students, especially those who are of color.

“We're offering scholarships for anyone who wants to become a teacher. $20,000,” Thurmond told California Black Media. “I sponsored a bill, HB 520, that was focused on how we get more male educators of color. And that bill turned into funding in the state budget. That now means our residency programs can be used to help have male educators of color as part of the beneficiaries of that program.”