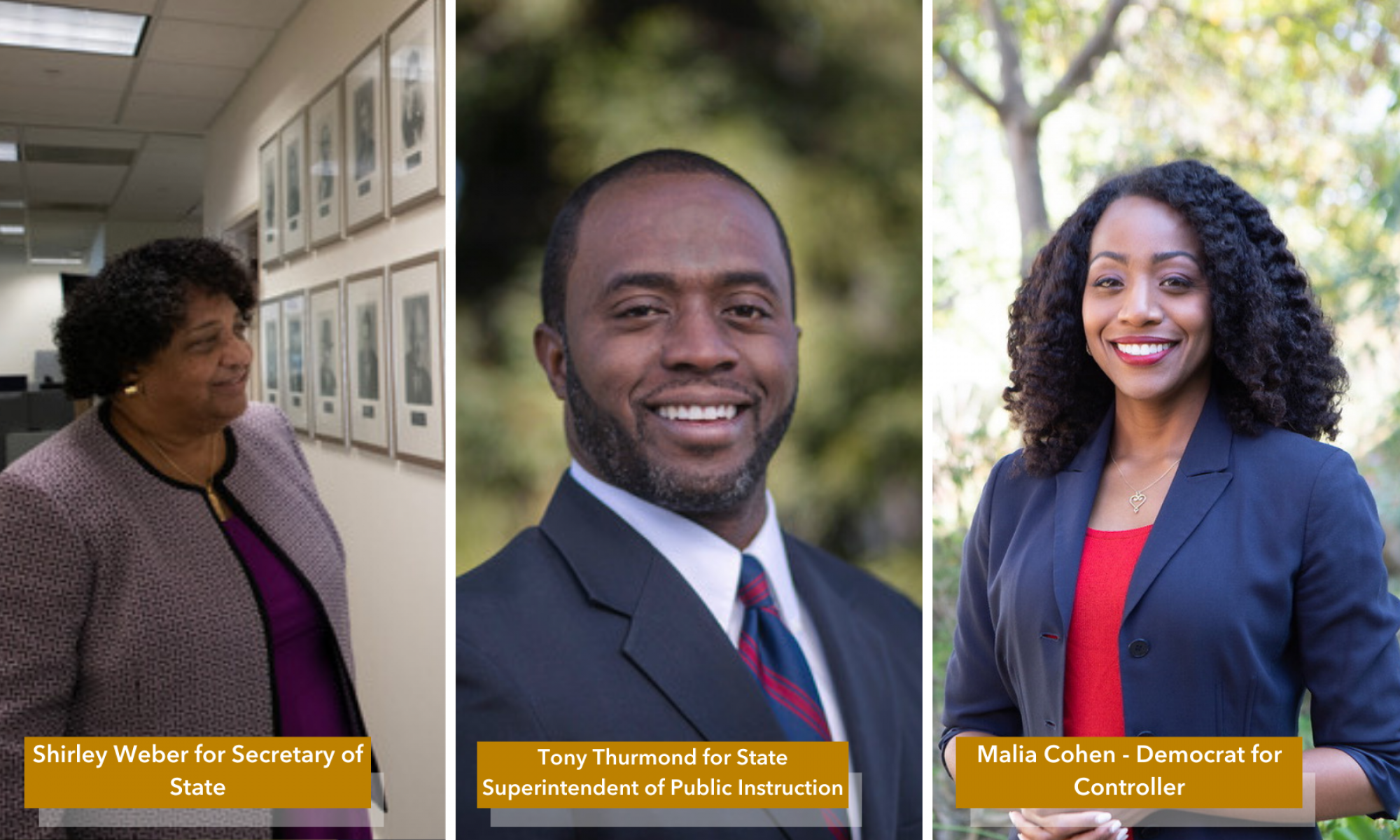 There are four Black candidates running for statewide office in California. Three are contenders to win as they fight it out with their opponents in the final days of the election.

Dr. Shirley Nash Weber (D), the incumbent Secretary of State (SOS), is the front-runner in her race against Robert Bernosky (R). Weber was appointed by Gov. Gavin Newsom in December 2020. She is California’s first Black Secretary of State and only the fifth African American to serve as a state constitutional officer in California’s 170-year history.

Since her appointment, Weber has led successful public information campaigns resulting in more Californians going to go to the polls. She conducted a tour of state schools and local communities as part of an ongoing initiative by her office. SOS is the third highest office in California and is responsible for establishing and implementing voting rules as well as the logistics of bringing the vote to a little 20 million voters.

Her opponent has a bit of a different opinion on the vote, as per his platform which lists “cleaning up” California’s voter rolls as number three on his to-do list. Many claimed that illegal immigrants were scattered throughout the voting rolls of Western states, all of which has been debunked by fact checkers like PolitiFact.

Tony Thurmond, a student of the public education system and a graduate of the foster youth system, is running for a second term as Superintendent for Public Instruction (SPI). Thurmond attributes the lag in the performance of Californian students to insufficient funding, an opinion which the teachers' unions support.

Although Thurmond is a favorite to retain his office, he has gotten some criticisms about how he handled public schools during the pandemic. Those angry about the school closures blame Thurmond and some studies show that children may have been held back academically by the shutdowns, particularly children of color.

Thurmond’s opponent, Lance Christensen, works for a California Policy Center, a right-leaning think tank. Christensen’s push for more control for parents and local communities is in line with Republican policies. SPI is a non-partisan elected position.

Christensen has called out teachers for “indoctrinating” children and has endorsed many right-wing views. “I’m a religious person, I’m a conservative, I don’t make any bones about that,” he said. “I don’t try to excuse it. I don’t hide it.”

Thurmond says that he wants to invest more in education, at least an amount that is commensurate with California’s standing as the fifth wealthiest economy in the world. His opponent is focused on removing bad teachers and giving parents more control.

Although Thurmond is the favorite and garnered a larger share of the vote during the June primary, Christensen appeals to some parents and his right-leaning language about school choice could make Thurmond’s race more difficult in some conservative areas.

The race for state controller is a bit more complicated. The previous occupant of the position, Betty Yee, a Democrat has termed out of her position. Malia Cohen is the Democratic choice to replace Yee. Cohen has dedicated her career in public service focused on making public dollars work for all Californians, her campaign says.

Her opponent Lanhee Chen (R) is a self-described “conservative in the vein of Mitt Romney.”

Chen has been an aggressive underdog in the race attacking Cohen on several issues. To date, Cohen has yet to directly debate Chen, who taunted her on Twitter with images of herself, alone, on the debate stage.

Angela Underwood Jacobs is vying to be the first Black woman to serve as Lt. Gov of California. She is a Republican.

Underwood’s experience includes service as deputy mayor of Lancaster where she was the first Black woman on the city council. Jacobs received 19.9% of the vote in the primaries, a distant second to incumbent Eleni Kounalakis’ 52.7%. Her platform includes many of the conventional Republican issues like smaller government and less regulation, but there are also some differences.

Her brother Dave Patrick Underwood, a federal security officer in Oakland, was shot and killed by a member of a far-right extremist group called the Bugaloo Bois — some members of the organization reportedly participated in the January 6 riots at the U.S. Capitol. Jacobs sued Facebook for promoting and facilitating the activities of these types of groups. Jacobs’ “Make California Gold Again” motto, is emblematic of her mildly Trumpian platform.