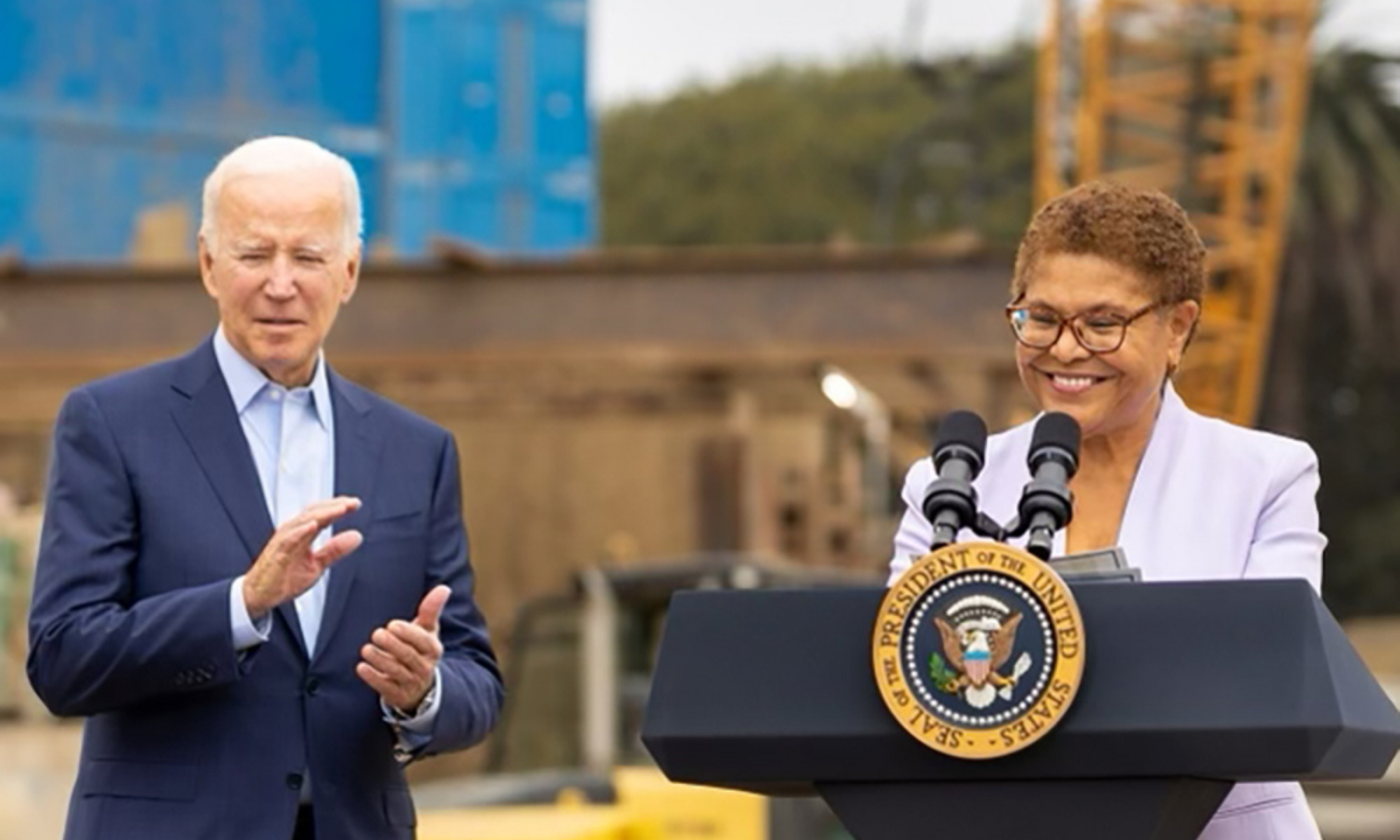 On Thursday, October 13 President Joe Biden and Congresswoman and mayoral candidate Karen Bass visited the site of the future Metro Purple Line stop at the VA Medical Center in Los Angeles and spoke about the Infrastructure Investment and Jobs Act, also known as the Bipartisan Infrastructure Law.

The Bipartisan Infrastructure Law is the largest long-term investment in infrastructure in the nation’s history. It provides $550 billion per year through 2026 for updating transportation including improving public safety and climate resilience. Grants can be awarded to projects across a broad swath of infrastructure including maritime, aviation, highways, and railroads.

“A law that’s going to deliver clean air; safer water systems, eliminating lead pipes; electric grid to deliver clean energy; high-speed Internet; electric charging stations all across America; the power to fleet — to take care of the fleets of new electric vehicles,” said President Biden. “It’s the most significant investment America has made in our infrastructure — literally, not figuratively — since the Interstate Highway System built by Dwight D. Eisenhower.”

Section 25019(a) of the law allows recipients of grants to “implement a local or other geographical or economic hiring preference relating to the use of labor for construction of a project funded by the grant, including pre-hire agreements, subject to any applicable State and local laws, policies, and procedures.”

“The local hire provision that we passed and that the President signed into law, allows local transportation agencies like L.A. Metro to prioritize the hiring of local Angelenos for projects that are taking place in their own backyard,” said Bass.

The Purple line extension runs from Koreatown, through Beverly Hills and Century City, to the Westwood VA hospital.

Other projects benefiting from the Infrastructure Law include the electrification of Los Angeles’ bus fleet by 2030, upgrading the electrical grid and internet, increasing lanes at the Port of Los Angeles, upgrades to Los Angeles International Airport, replacing lead pipes and expanding water recycling.

More than 350 projects have already been announced across California. Many of the projects in Los Angeles are targeted to be complete by the time the city hosts the 2028 Olympics.

President Biden pointed out that Republicans “who voted against the Infrastructure Bill, called me and the bill “socialist” and then attacked — all Democrats who passed it — “socialist,” “radical spending,” “rushed,” and “irresponsible.” “Well, now they’re quietly and privately sending letters to my administration asking for money. They’re talking about how important projects are in their districts and for all Americans. Well, guess what? I’m going to give them the money because it’s not about them, it’s about the people they represent.”