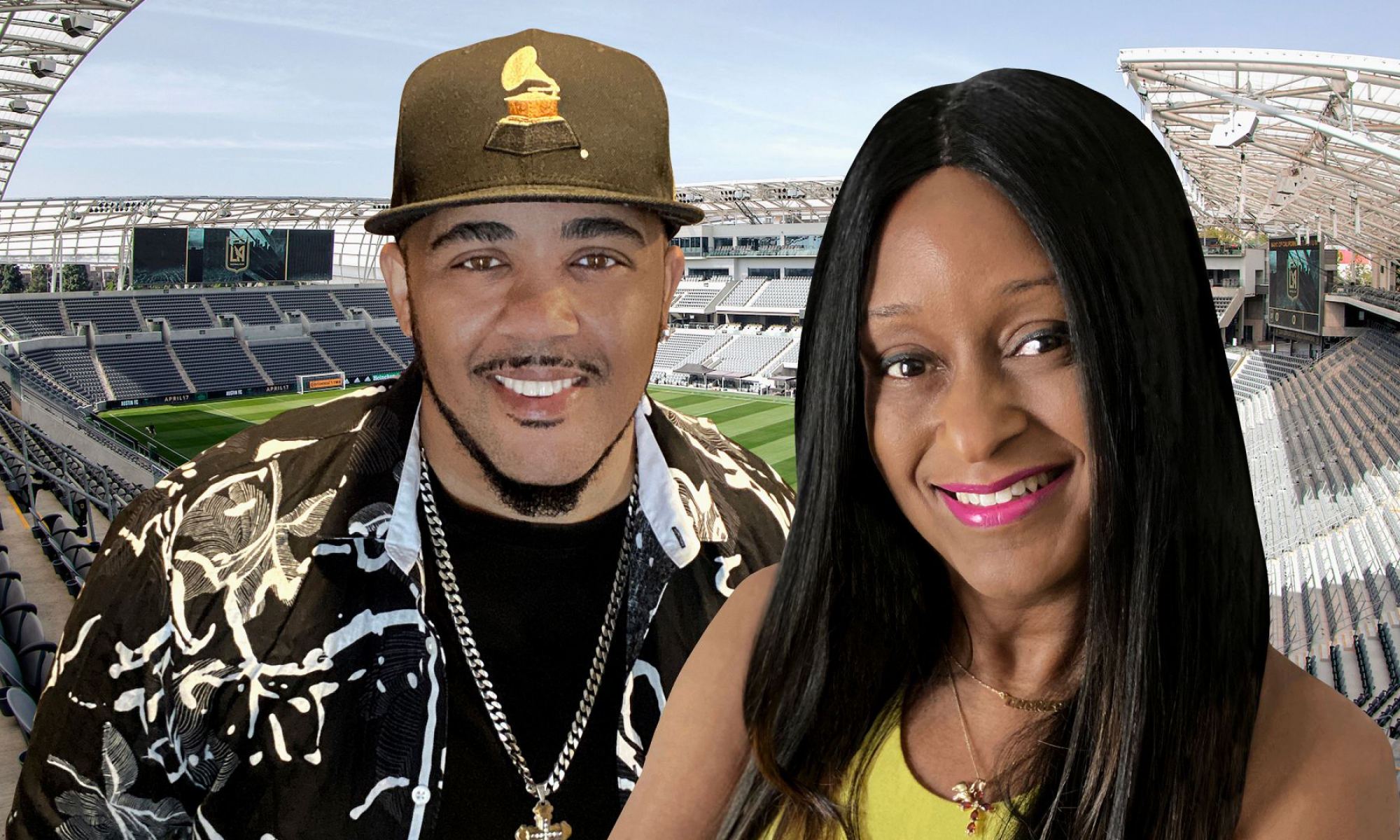 Her faith carries her. Nothing she does is about her. And this clarity allows her to keep the focus off herself and onto what she is called to put into the earth. Her name is Chantal Grayson.

Grayson is a celebrated force, and whether talking about the business consulting she provides to nonprofit organizations, or her multimillion-dollar acquisitions as a real estate broker, or the books she has authored inspiring young girls of color to accept and love themselves—making God proud is the substratum of her being.

In concert with her faith, being strategic is the North Star that guides this Illinois native as she navigates spaces in the business world she doesn't usually see Black women like herself. Paying close attention to what exists, what does not exists, and what's needed to fill in the gap is something else Grayson attributes to her success.
In fact, it was what was missing that led Grayson to team up with her partner Aulsondra Hamilton a.k.a. Emcee N.I.C.E., a Los Angeles-born author and established music producer, in 2018 to create the one of its kind Christian Hip Hop digital platform, God's House of Hip Hop. And what a partnership it's been. In year one, the two visionaries showed the radio industry and the underrepresented Christian community what God will do if you trust Him.

Such kindred spirits that they complete each other's sentences, Grayson and Emcee N.I.C.E. joined me for a delightful socially distant phone conversation to discuss their radio station and their upcoming 20/20 Summer Fest.

DUFFIE: I'd like to start by talking about your company called GH3. I read that the one goal of DASH Radio, the larger entity through which your station is powered, was to provide the best radio platform in the world. Tell me about your personal goal in starting God's House of Hip-Hop Digital Radio Station?

N.I.C.E.: We wanted to create a platform that didn't exist and fill a void for the Christian population.

N.I.C.E.: We also wanted to educate Christian hip hop artists as well. We wanted to help them understand how publishing works so they can reach the masses with their music. We tell artists if we can't pay you, we can't play you.

GRAYSON: That's right. Subsequently, we became the first radio station to pay royalties. But to be paid by us, their stuff has to be in order. We are a B.D.S. station.

DUFFIE: What does B.D.S. stand for?

GRAYSON: Broadcast Data System. It's what billboard uses to monitor and track who plays what and where. It's a charting system. It allows the world to know who has the number one record in the world. In the first year, we were the first station to receive a Stellar Award. We were deemed a station reaching out to young people.

DUFFIE: Did you feel any competition with what we've known traditional radio to be?

N.I.C.E.: No, because we had a great partner in DASH. They were already breaking the mold. They have eighty stations. Some are owned by them and some are not.

GRAYSON: DASH has seventeen million monthly listeners. We are in every single car. We own our stations.

DUFFIE: Wow! Speaking of your Stellar Award, how did it feel to receive your first Stella Award, and were you surprised that the station resonated so profoundly with people?

N.I.C.E.: We weren't surprised because we knew we had something special when we first approached DASH with our plan. There were concerns, though. Does hip hop and gospel have enough artists to hold down a station was a concern?

GRAYSON: We started with eight shows and now have twenty-five shows. We are all over!

N.I.C.E.: Including in Africa. We're in Texas, Atlanta, Boston, Philly.

DUFFIE: How did that happen?

GRAYSON: N.I.C.E. is being modest. He has a sixth sense for trend. The first eight shows were trendsetters within their own genre. We made sure our programming wasn't just music. We have a Christian Hip Hop sports show. We have Christian artists doing their own on-air shows.

GRAYSON: Our object was to mirror secular radio from a Christian standpoint.

DUFFIE: Let's pivot to talk about the big event, the upcoming 20/20 Summer Fest taking place September 17th and 18th at Banc of California Stadium. Emcee N.I.C.E., you are a multi-platinum music producer, actor, and author. Ms. Grayson, you are a real estate agent and business marketing and branding consultant. Why the leap into concert production?

GRAYSON: We felt like the natural evolution of a radio system is a community festival to get out there and show mainstream how live entertainment looks. We didn't want to do it in a church. We wanted to do it like the big boys. There's so much talent out there. There are so many amazing artists, and I felt it was time to leverage my relationships in LA to showcase these artists.

N.I.C.E.: Our whole objective is to create the largest Christian Hip Hop festival in the world.

DUFFIE: That's awesome. You two have quite a lineup for Summer Fest. Watching the Youtube announcement, I thought this level of production takes a lot. Was either of you concerned about the heavy lifting required?

N.I.C.E.: When you operate in excellence, you don't think about that. As far as visions are concerned, we did our homework. I know the sandbox at this level. I checked out the blueprint.

GRAYSON: Which makes us very confident. We used the first Woodstock as our example.

N.I.C.E.: We are overachievers. One of the mottos we have is, ‘for any great achievement; someone has to be the first to do’ -- why not us?
DUFFIE: Given the pandemic, you two chose to postpone the event last year. What made you not follow everyone else's lead to cancel? And did any of your headliners give you pushback?

N.I.C.E.: Luckily, we're in a genre where the artists aren't making $100,000 a year. For us, it was just a matter of telling the artist the real situation.

GRAYSON: Being in the sandbox we're in, we knew what everyone else was doing. We couldn't do a hard stop, hard start, hard stop, hard start like the bigger folk could do. I also had family in the medical field telling me that things were more serious than people in the festival industry were saying. The reset gave us an opportunity to really think about options. One of the things we did was align ourselves with a streaming company. Now we have a $20 streaming option, which is very interactive and provides global access.

DUFFIE: Can we talk about the diversity of your hosts and artists? Well, there are way too many artists to start naming names, but in terms of hosts of the Summer Fest, you have Kurtis Blow, Willie Moore Jr, and Chris Chicago. You have artists across the gender and racial spectrum. How important was it for participants to represent the audience you sought to attract?

GRAYSON: That was really important. We have the most female artists in our festival than any other festival.

N.I.C.E.: Blow's stamp on this signifies our value. He's now a preacher. He wanted to be involved. Moore gives it a stamp from the gospel space. Chicago gives it a stamp as a radio guy with deep faith. Making sure that we had all facets of faith-based and hip hop involved was intentional. Alex Zurdo is doing 16,000 people in his shows. He's added value.

DUFFIE: What is your prayer for the projected three to four thousand attendees of the 20/20 Summer Fest?

GRAYSON: For people to come have a good time listening to music and partying.

Having amassed a monthly listenership of four to five hundred thousand in just three years, in a space that did not exist, along with being nominated for their third Stella Award, Grayson and Emcee N.I.C.E. are in full throttle. They are confident that the same God who anointed them to start GH3 will continue to use them in unique and purposeful ways to share the gospel with the world through music.

To see the Summer Fest headliners and to purchase your tickets for the Gospel House of Hip Hop's 20/20 Summer Fest, visit 2020summerfest.com.