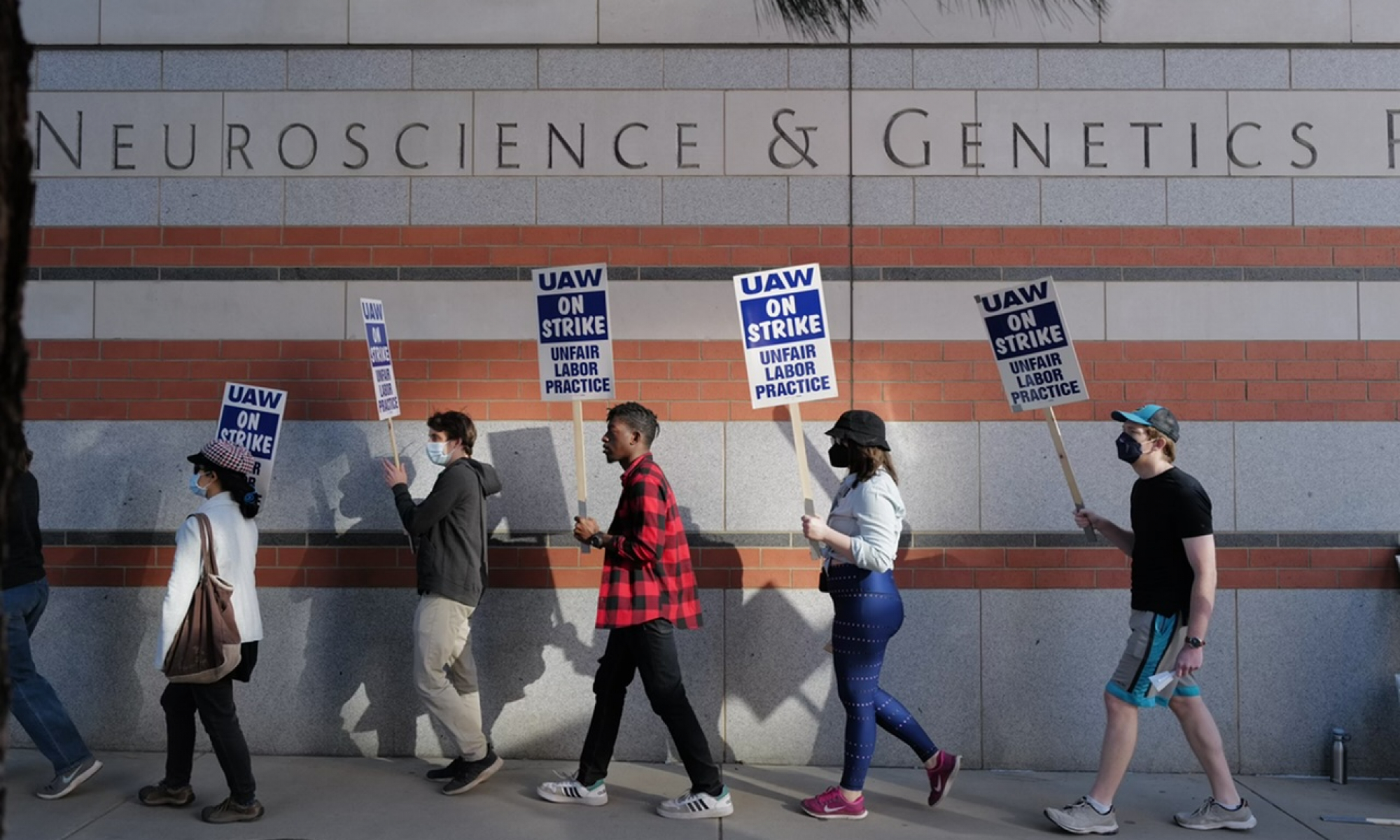 Around 48,000 academic workers at all 10 University of California (UC) campuses went on strike Nov.14, shutting down classrooms and research laboratories in the largest employee walkout at any academic institution in history.

The Post-Doctoral scholars, teaching assistants’ and associate instructors, graduate student researchers, and academic researchers are represented by the United Auto Workers union in contract negotiations with the UC system.

Bargaining between the disputing parties has been ongoing for months, and while UC officials recently called for a third-party mediator to address remaining issues, they are continuing to negotiate without one.

“When I was working in the lab, I worked 50-60 hours per week, and the salary was so low that every month I really had to think about if I would make it through the month,” said Neil Sweeny, President of UAW 5810, which is representing the striking UC employees. “I have two small children and my partner was a full-time student. We lived in campus family housing and we went to the campus foodbank every month to make sure that we had food. This was while my research was bringing in millions of dollars in research funding for the University.”

The workers are demanding better pay and benefits, including wage increases tied to housing costs. Housing costs in California are among the highest in the country, especially in the Los Angeles and San Francisco metropolitan areas.

Aside from UC campuses located in the state’s biggest cities, many of the research university system’s campuses are in parts of the state that have relatively high costs living, like Berkeley, San Diego and the Westside of Los Angeles.

“UC’s pay falls below all their self-identified peer institutions, including Harvard, Stanford, Yale and even public schools like the University of Michigan where living costs are far less” the union said in a press release on Thursday.

The UC maintains that “On average, UC rents systemwide are 20-25% below market rates, with some campuses providing even deeper discounts. UC has offered wage increases for all UAW members which would further help them meet their housing needs.” 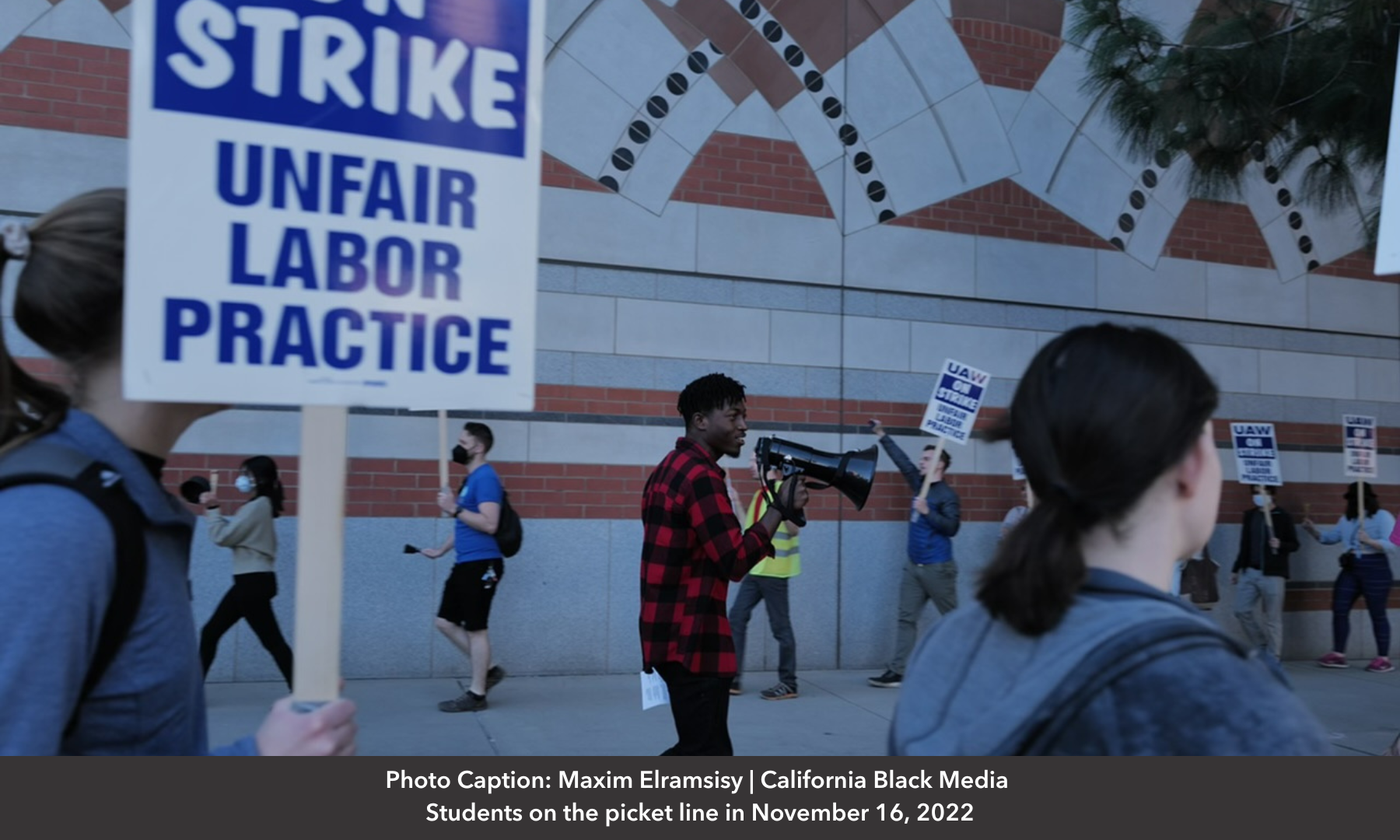 “Being a TA pays for tuition but there is no way I can support myself in this city with what they pay,” said Victor E., a PhD. student and Teachers Assistant on strike at UCLA. “With teaching, my own coursework, and my research, there isn't really any time to pick up another job. This has resulted in me taking out loans just to live and eat here. This shouldn't be the case. With the amount of work the university gets out of its graduate students, postdocs, and others, a living wage is a small ask… A number one ranked public university should be doing no less and certainly much, much more.”

Another priority for the workers is transportation costs. The cost of gasoline has gone up around the world and according to a statewide survey conducted by The Public Policy Institute of California, an independent and non-partisan research firm, 43% of Californians including half of lower income residents worry every day about the high cost of gasoline and the increasing unaffordability of various modes of transportation.

The union wants UC to cover regional transit passes, and additional subsidies and incentives for taking public transit or bikes to work.

Although agreements have yet to be announced, on Thursday the UAW reported that “parties made progress on issues related to Parking and Transit, Appointment Notification, and Paid Time Off.”

There continues to be a large gap between the salary asks and the UC proposals. On Friday, a UAW statement said, “UC made another economic proposal to Academic Researchers containing 4.5% raises that do not match the rate of inflation.”

However, they did report progress in some other areas. “We have reached agreement on a few issues - such as health benefits improvements for Postdocs - which, while important, are not the major ones dividing the parties.”

As final examinations approach for students in the UC system, so does uncertainty. “UAW remains ready to meet for round-the-clock negotiations, but UC has not agreed to schedule sessions for the weekend,” a UAW release said. “Workers will be back on the strike lines Monday Morning.”

Students, faculty and elected officials are showing support for the strikers. Some professors are cancelling classes, and some students are electing to walk out. California State Assembly Speaker Anthony Rendon tweeted “Academic workers are essential to the success of all of our @UofCalifornia campuses. The UC must continue to bargain in good faith to reach an agreement with the @UAW.”