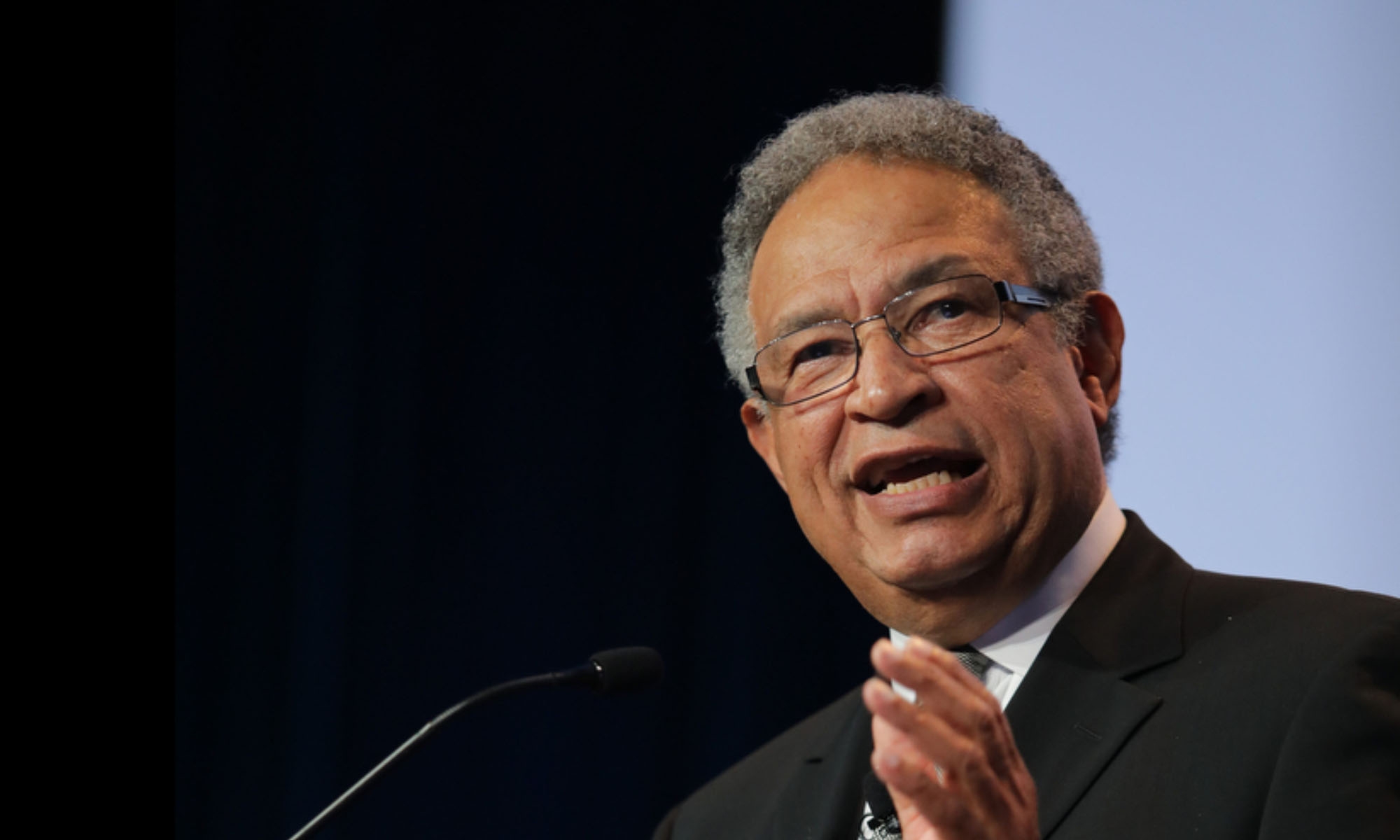 Tourism in LA has been growing steadily in recent years. LA welcomed 50 million visitors for the first time in 2018, funneling $23.9 billion into the city's economy. This progress is thanks to the work of the Los Angeles Tourism & Convention Board, the nonprofit organization which works to promote, Los Angeles, a city that's globally recognized around the world and one of the places first thought of when tourists refer to the United States. As multiple events and a new arena hits LA in 2020, the LA Tourism & Convention Board is heading into a critical time with an advantage.

Ernest “Ernie” Wooden, Jr. has led the organization as its President and CEO since 2013. Wooden grew up in another city that's considered synonymous with the United States — New York City. After getting into the hospitality industry while working for Hilton in high school, Wooden realized it was a life-long vocation, working his way up from a bellman position, to the accounting office, to eventually becoming the Executive Vice President of Global Brands at Hilton.

Wooden leads the LA Tourism & Convention Board with a steady, confident voice and a vision for LA's global impact. He is working towards a doctorate in International Business, and he uses his understanding of working across borders with an array of different cultures in his work promoting Los Angeles. Since he was a child going to school near the United Nations, Wooden has seen how hospitality involves interaction between people with diverse experiences, and that perspective helps him manage an international organization that reaches out to citizens of multiple countries.

Wooden works toward the mission of the LA Tourism & Convention Board, which is “to advance the prosperity of the LA visitor economy and the livelihoods which depend on it.” He says, “Tourism is a powerful force in the growth and development of the Los Angeles economy, [creating] employment opportunities for our residents and producing significant revenue that goes toward the betterment of our community.”

Wooden spoke with Suite Life SoCal about his long career in hospitality and tourism, his accomplishments so far in his position, and the future of tourism's growth in LA. 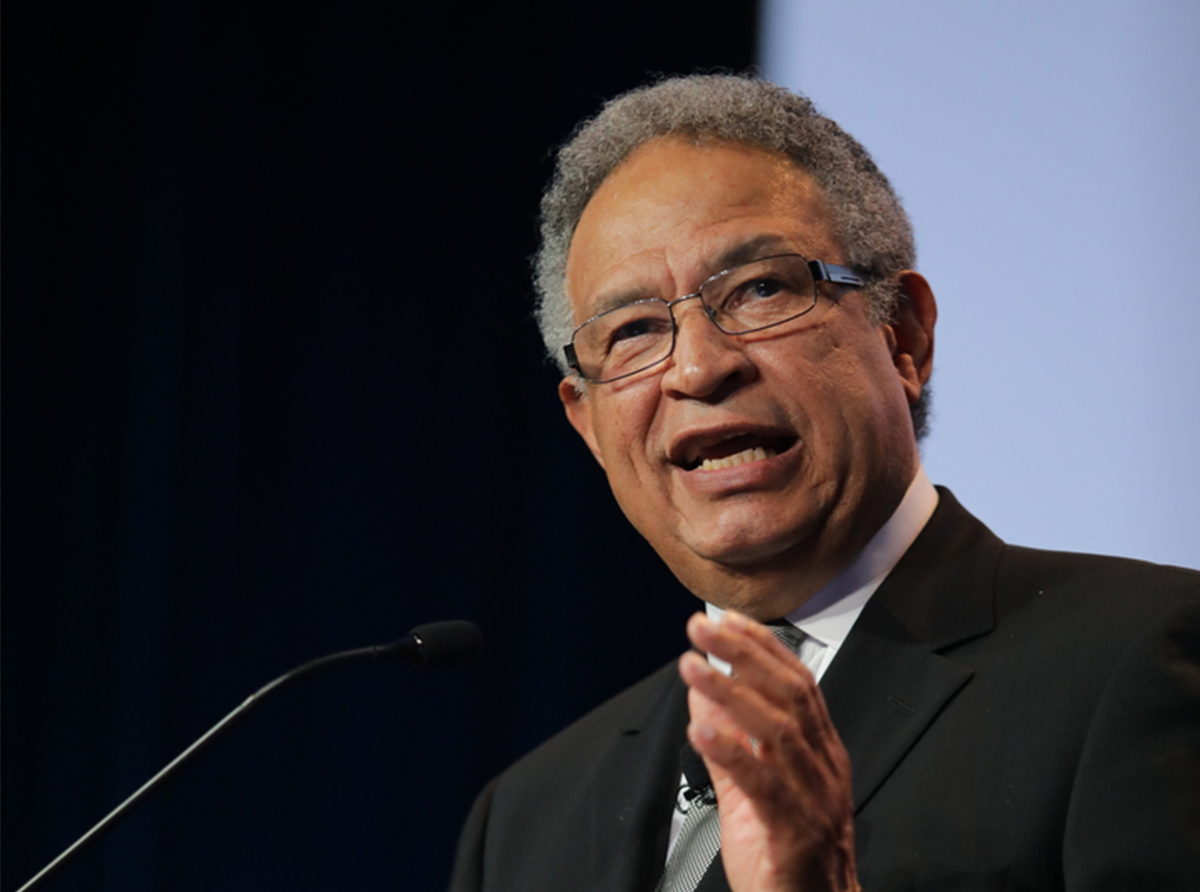 Early on, I set forth a north star goal of welcoming 50 million annual visitors by the year 2020...

and achieving it two years ahead of schedule in 2018 – is the most significant work we have accomplished at Los Angeles Tourism during my tenure."

SLSC:     You started quite young, what inspired you to get into the hospitality industry?

EW:  At age 17, I was looking for a job while attending high school, so I walked into a nearby hotel – the Sheraton Russell (in New York City) – and applied for a position. I was hired as a bellman and later advanced into their accounting office. Over time, the hotel business developed into a lifelong career in hospitality. I was attracted to this industry because I'm a people person, and so hospitality was a natural fit for me. Global travel, languages, and meeting people from all parts of the world has always intrigued me. In fact, as a young man, I attended school a block away from the United Nations in New York City and once aspired to become a translator. Born and raised in NYC, I constantly had diverse experiences with international colleagues, visitors, and patrons and felt hospitality was a natural outgrowth for what I wanted to do with my career.

SLSC:     How did the skillsets that you developed at Hilton assist you in your commitment toward overhauling LA Tourism?

EW:  When I joined the Los Angeles Tourism in 2013, I knew it was not only a unique opportunity but also a natural evolution from my work at Hilton and the hotel industry. When I served as the Executive Vice President of Global Brands at Hilton, I focused on marketing an array of Hilton brands around the world. At Los Angeles Tourism, it is a similar scope of work, except the product in an entire city, one that is globally recognized. The opportunity to brand and share the story of Los Angeles was an outgrowth of the work I did for commercial brands, but this time to bigger and much more diverse audience. What I've learned throughout my career is to excel in hospitality. You must enjoy being around others and have a broad view about different cultures. People that are extroverts and have a sincere desire to serve others with a genuine smile – these are the people that are well-suited for this industry and will do the best.

SLSC:     At the time, what did you see as deficient in LA Tourism? What hidden or untapped potential did you see?

EW:  After joining Los Angeles Tourism, I quickly realized both the organization and LA's tourism industry lacked a cohesive vision and goal. It is incumbent upon any CEO to establish a vision for their organization, define it clearly, and then ensure everyone on the team works together to achieve it. Early on, I set forth a north star goal of welcoming 50 million annual visitors by the year 2020 and demonstrated (through data) the major positive impact it would have on the City of Los Angeles – revenue, jobs, taxes. Setting this goal – and achieving it two years ahead of schedule in 2018 - is the most significant work we have accomplished at Los Angeles Tourism during my tenure. We identified key tactics needed to get there – both organically and inorganically, like hotel supply, infrastructure, airport connectivity, and public transportation expansion – and galvanized city leadership and the hospitality community to work together to achieve it.

SLSC:     How do your international studies and relationships influence your leadership at LA Tourism, and what does the state of Trade look like for LA businesses?

EW:  I always found it intellectually challenging and rewarding to understand the various nuances of the different cultures, including what works from a brand messaging perspective. I chose to focus my doctorate work on business in an international environment because I wanted to better understand how business was done across borders; I wanted to attain a greater understanding of potential issues that can arise due to cultural differences. These studies have deeply impacted my leadership and oversight of our international offices based in China, the UK, Australia, and India, where we have also cultivated incredibly valuable relationships with their respective travel communities.

Tourism in Los Angeles enjoyed the eighth consecutive year of record milestones in 2018, welcoming 50 million visitors for the first time in our destination's history. We are especially proud to note tourism accelerated Los Angeles County's economic prosperity as visitors pumped an all-time high of $23.9 billion directly into the LA economy, generating a record $36.6 billion in total economic impact Tourism is a powerful force in the growth and development of the Los Angeles economy, tourism creates employment opportunities for our residents and produces significant revenue that goes toward the betterment of our community.

SLSC:     What should local businesses know now in preparation for the coming of the 2028 Olympics?

EW:  It's a privilege and an honor to host such a significant global event in Los Angeles, where the world's spotlight will shine bright in the summer of 2028. It's expected we'll generate at least 760,000 hotel room nights during the Olympics period, making it one of the largest events in Los Angeles history. Our local hospitality, travel and tourism businesses should be ready to roll out our signature red carpet to ensure that our visitors and athletes from around the world have an unforgettable experience in our dynamic city.

Hosting [the] Olympic Games is truly a once-in-a-lifetime opportunity to amplify and influence the perception of a destination. It's one of the most effective international marketing platforms in the world, reaching billions of people in over 200 countries and territories. Host cities thrive on its enormous marketing powers as its positive images are beamed around the world. Simply put, the Olympic Games are a robust promotional machine for a destination to strengthen and enhance its global brand.

EW:  One of our top priorities in 2020 will be growing visitor demand from India. Los Angeles Tourism recently became the first US city destination marketing organization to establish a full-time office in India, based in Mumbai. India is one of the fastest-growing outbound markets in the world; we firmly believe the time is now to accelerate our strategic efforts in India, deepening our engagement to achieve long-term success.

SLSC:     What premiere events and/or highlights can we look forward to in 2020?

EW:  2020 is set to be a major year for Los Angeles as we expect to see the debut of the Academy Museum of Motion Pictures, which will feature more than 50,000 square feet of gallery space for a robust program of exhibitions dedicated to the history or film, two state-of-the-art theaters, the Shirley Temple Education studio and more. We're also set to host the 2020 MLB All-Star Game at Dodger Stadium, the 2020 MLS All-Star Game at Banc of California Stadium, and will also debut the state-of-the-art SoFi Stadium in July – the future home of the NFL Rams and Chargers.

How Local and Diverse Businesses Support the Super Bowl: An Interview with Chincie Mouton