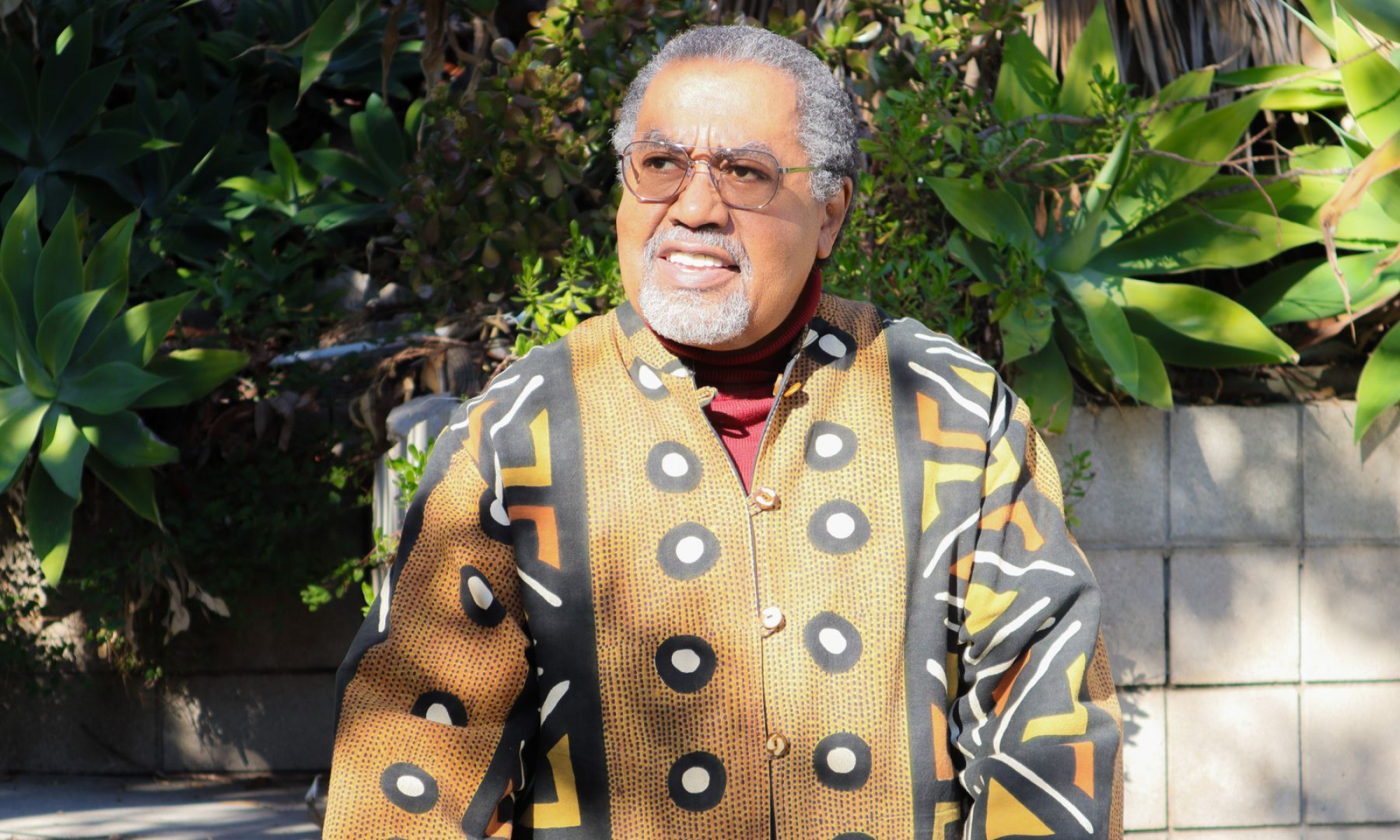 If you have not met Earl "Skip" Cooper, II, you are missing out on quite a treat. His smile makes you smile. His laugh makes you laugh. His storytelling is mesmerizing. His love for Black folk and Black businesses runs as deep as Lake Tanganyika (Africa's deepest body of water). He is the quintessential Black leader who adorns himself in African garb not because it looks nice but because he appreciates the energy of his ancestors and ethnic pride.

I opened our conversation by asking Mr. Cooper, who has served as President/CEO of the Black Business Association for more than forty years, about his move from Oakland to Los Angeles. Following his signature surge of laughter, he tells me that he moved to Los Angeles on Saturday, August 20, 1972. Intrigued by him remembering the exact date and the exact day of the week, I probed more.

"How is it that you remember the exact day so well?"

"Because it was one of the most significant days for Black folks in LA."

"It was the same day over 100,000 people filled the Los Angeles Coliseum to see Isaac Hayes at the Watts Summer Festival," he says.

If one didn't know any better, one would think Cooper's main fascination with the day was Issac Hayes, but in reality, it was a celebration of African American pride popularly known as Wattstax or Black-Woodstock.

For Cooper, learning about or being in proximity to the best in Black America excited him since the 1950s when he was a ten-year-old boy with a newspaper route that placed him eye-to-eye with Black royalty. Although he was too young at the time to know the full power of Black greatness, because he was what our grandmothers call "an old soul," he could sense something.

One of his distinguished paper route customers was Don Barksdale, an African American businessman in Oakland. Cooper recalls, "He was nice to me. He would sometimes give me a tip. And for Christmas, he would give me an envelope with five dollars in it. He was one of the first African Americans to play in the NBA. He had a nightclub and radio station."

Another distinguished customer of Cooper's was J.C. Patterson, who was one of the top real estate brokers at the time. Also on Cooper's paper route was the historic Ebony Hotel, the hotel Black performers like Cab Calloway lodged in when they were in Oakland before the Civil Rights Movement.

Something else that swelled Cooper with Black pride was the JET Magazine which he began reading around the same time he was delivering newspapers. To this day, Cooper still has the first copy of  JET Magazine with Sugar Ray Robinson's wife wearing a mink coat on the front cover.

The significance of these influential Black figures, historic landmarks, and glowing print images is found in one word: exposure. We often hear it said that exposure is everything. For young people to know the extent of their potential, they need to see what they can be in those who look like them. Well, having grown up in West Oakland where 90 percent of the projects where located in the 40s and 50s, Cooper never had to look far to see who he could be. And although his community was considered "the hood," respect and dignity were instilled without prejudice.

By the time Cooper showed up as a young man on USC's campus in the early 70s—being one of the first persons in the nation to earn an AA degree in African American Studies from Merritt College in 1968—  to participate in their entrepreneurship and master's degree pilot program, there were two things he already knew: One; he knew who he was. Two, he knew he was "going to do his thing" in business.

With the awareness that LA had its fair share of Black entrepreneurs, Cooper almost immediately connected with what was called the Black Businessmen's Association of Los Angeles; an organization founded in 1970 by Clarence Lofton, Alan Bennett, Robert Collins, and John LeDay following a minority business program led by UCLA's first African American Vice Chancellor, C. Z. Wilson in 1969. As Cooper recalls, "The majority in attendance at the program were African American. They had a talking session with the attendees, and out of that came the need for a Black Business Association. He [Wilson] assigned one of his staff members to help structure the men's association. They didn't want to be under the Black Business Chamber. We wanted to be independent. We had some outstanding African American entrepreneurs."

"A main focus for the BBA must be helping African Americans to become stronger and more unified.”

The Black Businessmen's Association of Los Angeles, later renamed Black Business Association (BBA), represented those outstanding entrepreneurs. From the start, there were approximately forty Black-owned businesses that BBA advocated to expand contract procurement opportunities with the public and private sectors and identifying financial resources for the growth and development of Black businesses.

As one of the nation's leading Black business entities, it was encumbered upon the BBA to know the local and national landscape. As a prominent voice and decision-making body, the BBA knew that the weight of this responsibility meant deepening their involvement from a social, economic, and political perspective.

Hence, whether it was the first issue of the women's magazine, Essence, being published in May of 1970; or the first issue of Black Enterprise being published three months later; or Thomas “Tom” Bradley being elected as the first Black mayor of Los Angeles in May of 1973; or Mervyn Dymally being elected as the first Black lieutenant governor of California in 1974; or Maxine Waters being elected to the California State Assembly in 1976 with Comer Cottrell, Sr., the founder and CEO of Pro-Line Corp.–the largest Black business in LA–as her finance chair, the BBA was front and center. In fact, the BBA was very instrumental in the success of Waters' grassroots campaign.

As reported by the Census Bureau, Los Angeles had the west coast's largest Black population during this same time period. Black-owned businesses continued to be one of the fastest-growing segments of the economy, showing a rapid growth in the number of businesses and total sales receipts. Los Angeles was home to some of the most prominent corporate institutions in the nation. Some of these business institutions were collaborative partners of the BBA to educate Black businesses about loans, financing, and how to achieve economic solvency. Southern California Gas Company, Southern California Edison, and Northrop Grumman also came alongside the BBA as collaborative partners and have remained steadfast in their support.

With a mission to "ensure that African American and other diverse business owners benefit from advocacy efforts to impact, improve and implement policy that improves access to contracting and procurement opportunities with the public and private sector, in addition to providing access to financial resources," the BBA has also forged alliances with political bodies and political officials who have helped the organization push forth its agenda to support Black businesses form and grow.

To this end, in 1976, Cooper and other leaders spearheaded the first trade missions to Washington, DC, where five members of the BBA were dispatched to deal with logistics and to meet with Parren Mitchell, one of the members of the congressional small business committee. It is said that Mitchell was overjoyed that a Black organization finally came back to the committee. Cooper reflects with much enthusiasm about this hallmark moment for BBA, "We had the political support to put together the trade mission. We had meetings at the White House and with major agency decision makers. We did our receptions with the CBC [Congressional Black Caucus] at the Capitol." He continued, "Parren became close with the BBA. Later he became chair of the Congress Small Business Committee and the BBA."

As the organization evolved through the years, annual, seasonal, and themed award ceremonies such as the Black Business Day Luncheon in the late 80s also proclaimed as Black Business Day in Los Angeles (City and County), the Annual Awards Dinner in recognition of Black History Month in February, the 2020 Virtual Veterans Procurement & Business Conference, the 2021 Virtual Salute to Black Music: The Business Behind the Music in June of this year, and the Feed Our Community program to support Black restaurants in providing free hot meals to those experiencing food insecurity, have been opportunities for celebrating what Black entrepreneurs have done and are doing.

Again, well versed in the implications of systemic racism, the BBA has also hosted workshops, trainings, and panel discussions over the years to help Black business owners bear the burden of bias and discrimination fatigue. In 2020, when Geoge Floyd's senseless murder prompted unprecedented giving towards racial reckoning causes to the tune of $50 billion in promises from corporate America, BBA sounded the alarm for Black businesses to not get their hopes up high where corporate America's promised were concerned. It was for these reasons that these dollars, to some extent, amounted to nothing more than "guilt money," and the money wasn't in the bank yet, the message was "let's keep our eyes on the prize."

What's the prize? From Cooper's standpoint, the prize is ownership. "I would like to see African American business owners own our brands and property. The United States is a capitalistic society, and our key essence of power is land and property. And so, we have to be in the business of acquiring properties whether industrial, residential, or commercial."

Cooper's additional point of concern as the curtain closes on his tenure is the notion that "no job in America is sacred." "Businesses that don't pivot, run the risk of becoming extinct. Think about Blockbusters. Think about Montgomery Wards and Circuit City." He elaborates further, "Think industrial industry — in the late 80s, the pager industry was booming. Then cell phones came and killed that. The cell phone started with charging by the minute. Then it went to plans. The banking industry went from doing banking in-person to doing business through a mobile app."

To Cooper's point, just as the fifty-year-old organization acclimated itself to creative ways of continuing to engage its constituency following the COVID-induced pivot, they are preparing for yet another. This time at the helm as their President/CEO passes the baton on to board-appointed Interim President Sarah Harris.

Harris, who currently serves as publisher of Suite Life SoCal magazine, has worked closely with the BBA and Cooper for more than twenty years. And as Harris prepares to take center stage on January 1, 2022, she does so with Cooper's blessing and enthusiastic support.

In this transition, Cooper leaves us with three things to consider: one, we still face systemic racism, and its impact on Black businesses; two, "A main focus for the BBA must be helping African Americans to become stronger and more unified;" and three, because the future of the world is the youth, we have to help young entrepreneurs grow strong businesses with our guidance.

We thank Earl "Skip" Cooper, II for more than four decades of selfless service and look forward to the BBA's next chapter under the leadership of Sarah Harris.